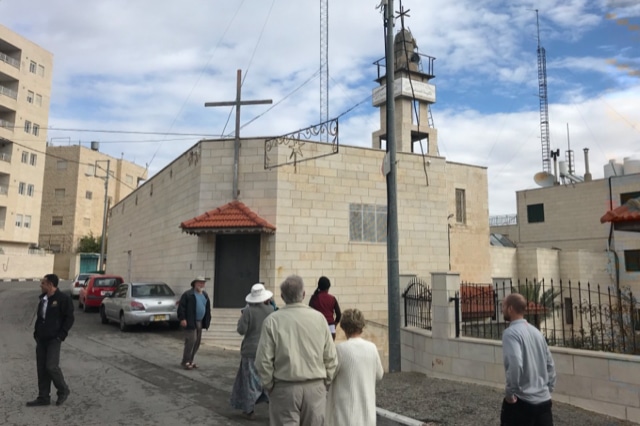 Seventy, or derivatives of seven in the Bible, represents the idea of rich fulfillment. I’m 70 years old this year. The nation of Israel is also celebrating 70 years in 2018.

I traveled to Israel last month on an advocacy tour with ANM, and I witnessed something remarkable on the seventh day of our trip. It wasn’t at all what I expected to find.

We were going to Bethlehem, and expectations were high. With Christmas only weeks away, images of a quaint first-century village came to mind and I began humming “Oh Little Town of Bethlehem.” When our vehicle slowed down and I looked out the window, however, a different kind of vision shattered my peaceful interlude: soldiers patrolled outside, carrying machine guns.

Bethlehem is a Palestinian city in the West Bank with about 25,000 residents. A huge wall separates it from the state of Israel. Checkpoints keep Israelis out of Palestine and Palestinians out of Israel.

We drove past Manger Square, the Church of the Nativity, and other tourist sites. Then we stopped at the First Baptist Church. Why did we skip all the biblical history?

Naim Khoury welcomed us into the church building. This Palestinian Arab pastor in his 70s met Jesus 51 years ago. He came from a long line of Greek Orthodox Arab priests who did not read the Old Testament. They believed it was “just a Jewish book,” written by Jews for their own benefit. It was not needed for salvation. In fact, they saw the Jews—and Israel— as their enemies.

Khoury told us more: “I wanted to read this discarded book for myself, but finding an Old Testament in 1967 was no easy task for a Palestinian. It took me six months… With each page I read, God Almighty gave me a special love for the Jewish people. It was a strange sensation! I questioned God, ‘How can this be real?’”

God’s promises to Abraham captivated Khoury. He had been taught that God was a promise-keeping God, but most non-Jews in his region didn’t accept the existence of Israel. So he wondered what he was to believe about this Abrahamic covenant? Naim became convinced that God had an eternal plan to use Israel to bless all the nations of the world.

This presented a huge problem in his family, but Khoury saw victory through prayer: “I began to pray. Seven years later my mother believed, and 27 years later my last uncle…embraced the entire Bible as the complete, infallible, and inspired Word of God.”

In 1980 Khoury founded First Baptist Church in Bethlehem with God’s promises to Abraham in mind.

“When I began the church 38 years ago,” he recalled. “The Lord told me that if I blessed his people Israel, he would prosper the work. I wanted to argue, but I agreed to obey. Persecution followed… When word got out that we supported the Jews, Molotov cocktails flew through the [window] panes. We replaced the glass. The deacons sat in the front row with buckets of sand and water to put out the fires.”

The building was bombed 14 times; the congregation had to totally rebuild it four times. They replaced the windows with bricks to prevent further damage. The local government tried several times to shut down the church.

Khoury’s congregation responded to the fear tactics with boldness. Every Sunday night the service was disrupted by the call to prayer from the mosque across the street. The church added loudspeakers to its steeple to broadcast services. A trained suicide bomber heard the message and went to Khoury’s office one day to ask him about Jesus. Three hours later, the young man asked Jesus into his heart. Today he is a witness for Jesus among the Muslims in Palestine.

“We are still here despite the Arab Palestinians being against us because we love and pray for Israel,” Khoury said. “We continue to grow. Today we have the largest Palestinian, born-again, evangelical, spirit-filled church in all of Israel. We have planted five other churches, including one in Jerusalem pastored by my son Stephen. Various programs and outreaches reach men, women, children, and youth.”

As Pastor Khoury spoke, I became aware that my tears were soaking my pants. I’m not a crier, but I was totally overwhelmed by the presence of God and the divine love that filled the room and flowed from this man.

Even when he told us about being shot four times or the murder of his brother in Jerusalem, I heard no bitterness, no self-pity. He was simply telling us of the difficult reality of the lives of Arabs who love the Jews and believe that God is not yet finished with Israel. Unemployment among his church members is 65%. Arab Muslims typically won’t hire them or rent to them. Getting special passes to work in Israel, on the other side of the wall, is nearly impossible. But they suffer with joy, believing that God will not forsake them.

As Khoury concluded our conversation, his face seemed to glow. “Our God is love. Our God is faithful… He is alive today and forevermore. He is watching over us until the day that he unites all of us with his Son.”

By this time I was drenched from crying. I thought of the words of 1 Peter 2:5: “You also, like living stones, are being built into a spiritual house.” For me in that moment, the ancient stones of the biblical sites we didn’t see in Bethlehem couldn’t compare with these living stones.