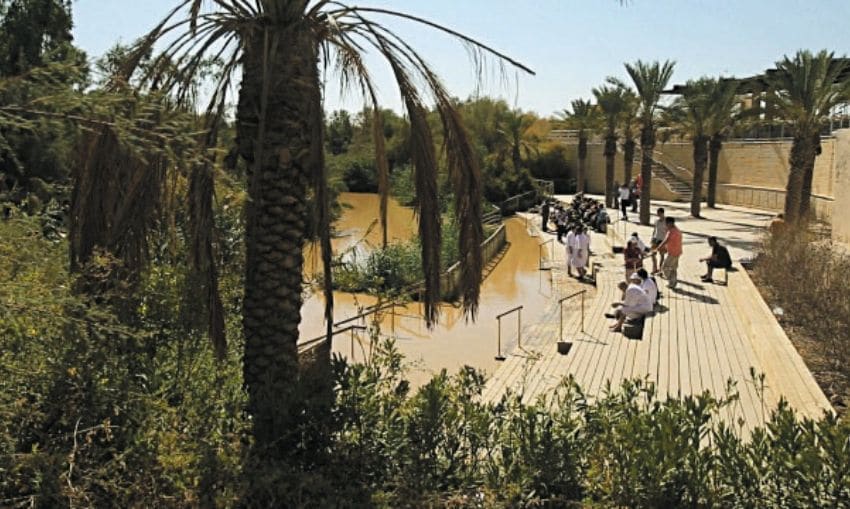 “Go to the Jordan River today, and I will send righteous men to baptize you.”

Abigail* was Jewish, but had accepted Jesus as her Messiah a year ago. She longed to be baptized, but didn’t know whom she could trust. For months she had prayed that the Lord would somehow arrange for this to happen.  That morning, God told her what to do.

By faith, Abigail drove 40 minutes outside of Jerusalem to the international baptism site called Qasr el Yahud. It was fairly secluded, but according to tradition, this is the place near Jericho where the Israelites crossed the Jordan River into the Promised Land.  Locals also claim that it is where Elijah crossed the Jordan before he was taken into heaven on a fiery chariot. Lastly it is claimed to be the spot where John the Baptist baptized Jesus.

When she arrived Abigail rented her required white robe and walked down the stone and cement steps that led to the pools. Her thin cotton garment fluttered in the breeze, which was a welcomed relief from the scorching hot sun. There she waited.

She saw dozens of modern-day pilgrims from many nations waiting in line and inching their way to the brown muddy water, expecting a spiritual encounter. The high-pitched trill of African women pierced her ears. Guitars played and voices in multiple languages praised Jesus. National flags and crosses paraded past her on the way to baptism sites.

For hours she heard pastors and priests say, “I baptize you in the name of the Father, the Son, and the Holy Spirit.” Then the smiling faces, dripping with water, passed her as they climbed back up the steps, feeling at one with Jesus.

God brings his people together

She recognized two Arab pastors she had heard speak at Messianic conferences. They were walking toward her, leading nine other new Arab converts down the slippery stairs for baptism. She knew them and knew they were righteous.

Abigail was Jewish and the men were Arabs, but their shared faith in Jesus unified them. She greeted the leaders and told them how she knew them. After relaying what God had spoken to her, she said, “It would be my greatest honor if you would baptize me. Will you do it?”

They did. They hugged. They cried.

The pastors then told her about a fellowship of Messianic believers in Jerusalem so she could have the support of a community of faith in her hometown.

This unusual encounter was aired on the pastors’ Facebook channel, which is watched by Arab believers in Egypt, Jordan, Iraq, and Syria. Responses on Facebook surprised the pastors:  many Arab believers did not even know that any Jews had accepted Jesus as their Messiah. They rejoiced to know they had brothers and sisters who were Jewish.

One of the pastors shared, “This is a 21st-century miracle! Think about it. A Jewish woman came and stood by the water on a 105-degree day because the Lord told her he would send righteous men to baptize her. It was an anointed moment. God is bringing people — Arab, Gentile, and Messianic Jewish believers — together in one body. All glory to God.”