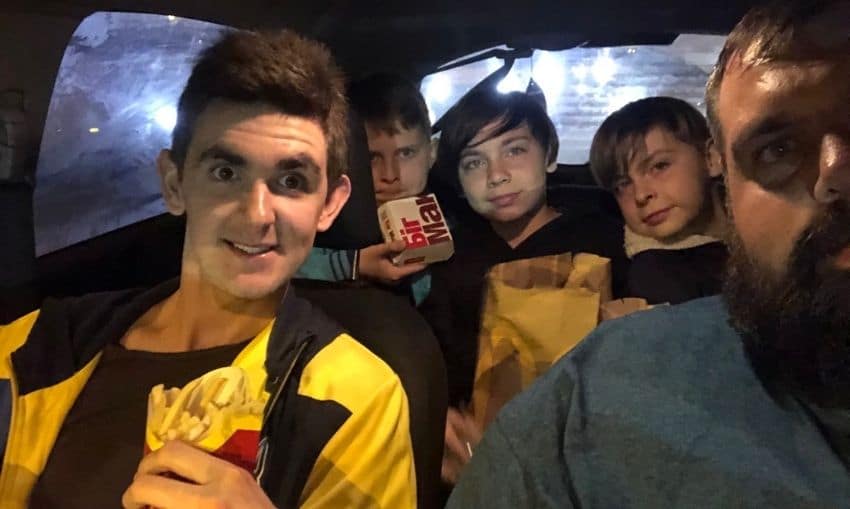 Artyom, a tall and skinny 11-year-old in Ukraine, peeked around the corner into the common room of the government-run orphanage in Kyiv (Kiev). The children were having their allotted free time, but he was too embarrassed to join the group. Since his recent arrival from another institution, his body had broken out in itchy bumps. Scratching made open sores, then scabs, and his condition went from bad to worse. Now he was the awkward new kid.

The trauma of separation, rejection, and regimented orphanage life began for Artyom at age seven. After his father died and his alcoholic mother could no longer care for him, his foundation — broken as it was — totally evaporated. He felt no more important than a piece of trash.

Over the last four years, his salt-tears had turned to anger, hardness, and mistrust. Loneliness was his constant companion, although he was never alone. He shrank into himself, trying to take up less space and not be noticed in the stark, concrete building that was now his home. No longer having anything of his own, he prized the clothes that he arrived in, washing them out every evening in the dingy, urine-scented communal bathroom with the lone light bulb. He hung them to dry in one of the minuscule cubbies that lined a wall of the room where he and eight other boys slept. His roommates wondered why he didn’t just wear the new clothes the government readily provided.

As Artyom looked into the common room that day, he clung to the wall, not wanting to be pitied or teased because of his skin condition. While he tried to hide, he listened to a man, big as a bus, speaking quietly to the assembled group.

“We were created by a God who loves us,” the stranger said. “He loves us just the way we are with our fears, scars, and failures. This God provides, protects, and has a purpose for us — all of us.” He pointed to each individual child and, seeing Artyom on the fringe, winked at him. “You don’t have to do anything to make Him love you — you just have to believe He does. You can depend on Him. He doesn’t drink or take drugs. He will never leave you, even when life gets hard.”

That night, Artyom asked the other boys in his room, “Who was that guy who came today?”

In unison, they all replied, “Alex!”

When Alex was 10 years old, his mother died. He felt lost being part of an incomplete family.

However, when his mother had been alive, she had instilled in Alex a love for Jesus. In later years, when his church family visited an orphanage, he saw his life differently. Alex realized the gift he had, not only in his surviving earthly father but also in an eternal heavenly Father. He decided then and there to serve real orphans who had no families at all.

Now, Alex came every Saturday to the orphanage where Artyom lived. Staff members changed, children came and went, but Alex was a steady presence. He talked more about this God named Jesus and showed everyone His love through fun activities and consistent support. He listened to the children with every fiber of his being and made each kid feel like he was the most important person in the room. Although Alex’s deluxe size made the common room feel small, his words enlarged Artyom’s heart a bit more each week.

“Would you like to come to my house this weekend?” Alex asked Artyom.

Shocked and excited, Artyom accepted the invitation. Alex’s small house held a real family — Alex, his wife Lena, and their four children. Artyom showed a hint of happiness, so Alex invited him every weekend for the next few years — until the boy turned 16.

When a child in a Ukrainian orphanage finishes ninth grade (11th grade is the highest in the country), the government no longer funds his housing or education. Only 15 or 16 years old, the adolescent must then enter the world vastly unprepared for what awaits him.

Hope Now Ministries in Atlanta, Georgia, also supports Ukraine’s orphan population. They report that a massive number of these orphanage graduates — 60 to 70% — fall into organized crime or prostitution to survive. About 20% end up in prison, and 10% commit or attempt suicide.

In 2015, Artyom and 10 other teenage orphans had to move on. Alex could not bear for them to end up on the streets or return to highly dysfunctional families. By faith, Alex committed to caring for them himself. He fervently prayed, “God, please show me what to do!”

After the fall of communism, Alex’s uncle, Stanislav, bought a rundown Russian indoctrination camp about two hours from Kyiv in Chernihiv (Chernigov), Ukraine, where children had been taught there was no God.

In 2003, Stanislav became the director of what is now called Open Doors Christian Camp. He engaged Alex’s help, and together they planned to have week-long camps for orphans and spread the life-saving gospel of Christ. Alex stayed involved behind the scenes, but when Stanislav died in 2014 of a stroke, Alex assumed leadership.

During the summer of 2015, Open Doors became the home of Artyom and the 10 other kids. They were cared for, nurtured, loved, and taught the Bible. Artyom finally began to relax, and he played sports and sang. The deep pain that he had carried for a decade seeped out through his pores and seemed to wash away with each shower. One day he noticed that all his skin problems had disappeared.

Alex worked and prayed to secure funding for the orphans’ continued support. At summer’s end, a businessman gave Alex enough money to rent two houses in Kiev — one for boys and the other for girls. The kids moved in and called them “Light Houses.”

In these houses of light, they were discipled. Alex helped them get schooling to develop the skills that he saw in them. Artyom took vocal lessons and applied to college. After a year of receiving love and discipleship, Artyom and the others returned to Open Doors for another summer. While there, 10 of the children accepted the Lord into their hearts.

It wasn’t until Alex took a group to the seashore that Artyom asked Jesus to be his Lord and Savior. Once he had, exultation erupted from deep inside his soul. Alex watched as Artyom joyfully jumped in the sand and trustingly ran into the water.

That fall, Artyom was adopted by a family from the church that Alex pastored. He fit like a letter in an unsealed envelope, covered and embraced on all sides but with a loose flap — like a door, open and ready to receive love.

Because of his exceptional voice, Artyom had a rare opportunity to perform at the Ukrainian President’s New Year’s party. Triumphantly joining in the celebration — only a dream for most children in Ukraine — he sang to a huge audience at the concert hall in Kyiv.

Today, Artyom is a healthy 21-year-old. He finished his required courses in college and is now majoring in landscape design. While working as a sales assistant for an online toy store, he is also leading online worship and sports this summer at Open Doors. Artyom’s anchor is Jesus, and his life is stable.

Alex reflects, “I have watched God mold these kids into His image. With my own eyes, I watched them become whole. As mature Christians, they share Christ’s love and hope to those who are in the position they were once in. The way we serve the Lord is by serving others.”

What an amazing transformation!

A few month’s ago, we sat down with Alex and his wife Lena to learn more about the incredible work God is using them to do in Ukraine. You can hear their encouraging and inspiring interview below.

You can also hear more incredible interviews with ANM partner missionaries from around the world when you subscribe to the Advancing Native Missions podcast. Listen and subscribe on iTunes, Spotify, Stitcher, TuneIn, or your preferred podcast location.