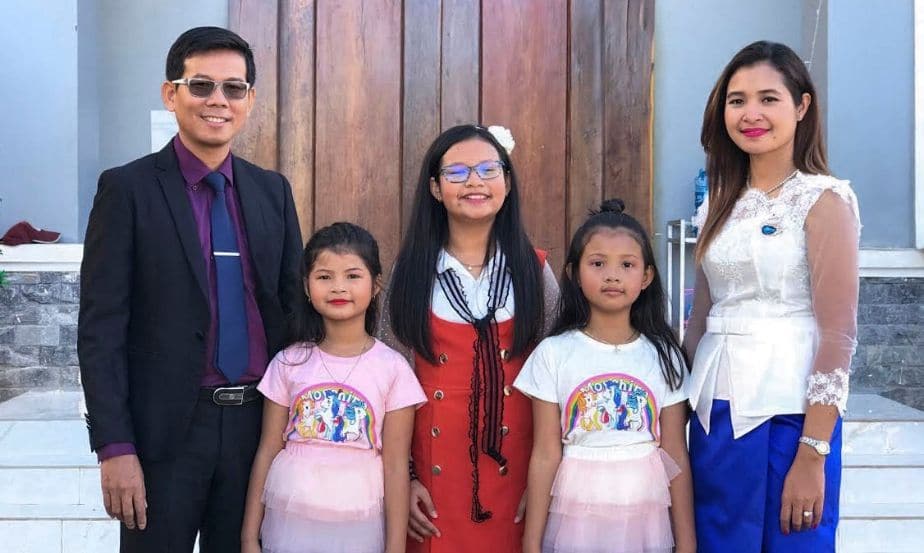 It was humid, and the temperature topped 100 degrees. A severe drought had gripped this part of Cambodia for months, and everyone eagerly awaited the rainy season. It finally arrived on this day, March 30, 2019.

The wind began to gust. The sky darkened. Flashes of light came through the door, and claps of thunder echoed in the distance. The earthy scent of rain filled the home.

The storm got closer. As a precaution, Esther turned off her computer and unplugged everything electric. She walked toward the door to close it so the rain would not come into the house. She flipped off the overhead light and looked out the window to see what would happen next.

A blinding light instantly shot through her belly, and the room filled with a brilliant white color. A fraction of a second later, she heard a crackling sound as the light blasted through the ceiling and split the cement tiles on the roof. Then came the deafening sonic boom of the thunder.

Terrified, she grasped her belly and began to slowly massage it. Shaking her head to clear her mind, she questioned what had just happened. Realization broke through to her consciousness. “I have just been struck by lightning!”

The next thing Esther did was dance, praising God that she was safe and alive. Then the screaming of her children snapped Esther back to reality. She flew to the other room, finding them safe but scared. Together they embraced, cried, and thanked Jesus for his protection. An hour later the storm had passed, and Esther and her daughters mopped up the water. They phoned the electric company and Sokhon. That night at bedtime, Esther’s ears clogged up as if she were crossing a mountain. She prayed, and that too went away.

This isn’t the first miracle Esther has experienced. In 2015, while driving to visit family, Esther and Sokhon rounded a corner and immediately hit two large gravel piles blocking the road. Esther cried out, “Jesus, protect us!” The car soared over the gravel, landed upside down, and skidded to a stop inches away from a steep hillside. Esther and Sokhon didn’t even have scratches.

Days later, the rented building they used for a church in the evenings and a vocational school during the day burned to the ground. It was rarely empty, but this day was a holiday so it was closed. No one was hurt. Today the ministry owns a new, larger building that is used for a church, Bible school, primary school, and conference center—thanks to ANM donors. God protects his servants and brings beauty from ashes.

In just 14 years of ministry, Sokhon and Esther and their team have trained more than 500 workers, planted 105 churches, and planted churches among six of Cambodia’s 31 ethnic groups in eight of Cambodia’s 25 provinces. Their goal is a church in every village in Cambodia—all 14,000 of them.

Esther says, “Everything we do is to promote the Good News of our Lord Jesus Christ among the unevangelized and unreached peoples of Cambodia, to show God’s love to the unloved, to bring salvation to the lost, and to convey restoration to the broken-hearted.”

With faith and dedication, these effective native (indigenous) missionaries—who know the language, culture, and people–can do it. They live among their countrymen on the same socio-economic level and gain trust through meeting the needs of those around them—like the well that Sokhon was dedicating. During the recent drought, the ministry drilled 75 wells in remote villages, each serving 30–40 families and opening their hearts to Jesus.

It’s clear from the miracles we’ve already seen that God has more for Esther and Sokhon to do for his kingdom. God’s mighty hand is truly on this ministry.

Make a global impact by partnering with fruitful local ministries like this one.