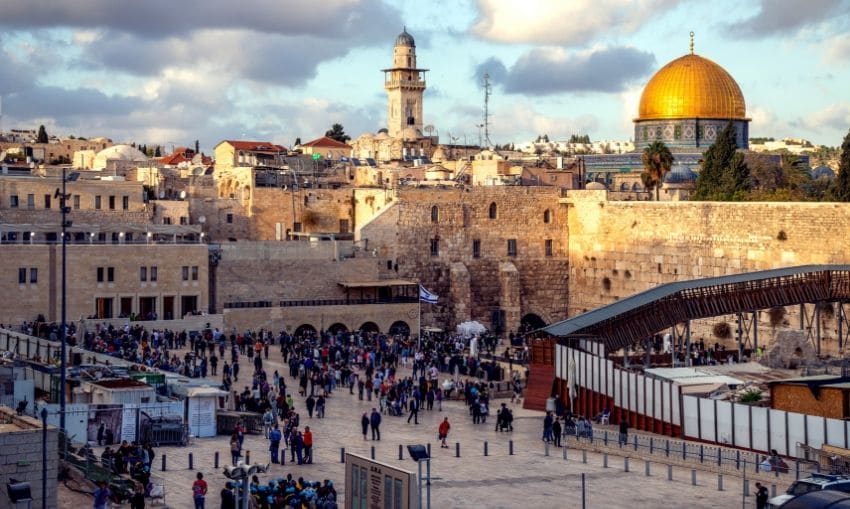 Omar* began every day before sunrise. He rose, washed his left hand three times, rinsed out his mouth, and finished the rest of his ritual cleansing before morning exaltations. He covered himself between his navel and knees, spread out his rug toward Mecca, stood on it, and raised his hands to his ears, saying, “Allah is the greatest.” He then launched into prayer.

The Western Wall from the Jewish side

Omar heard about Jesus from an Arab Christian pastor named Nabil. After many discussions, Omar came to Christ on a sunny morning toward the end of March.

Today, March 23, 2019, Pastor Nabil was taking Omar and five other Muslim converts to visit some Jewish and Christian sites in Jerusalem. The first stop was a view of the Western Wall and the Temple Mount from the Jewish side.

Omar had seen the wall from the Al-Aqsa Mosque on the other side when he visited his uncles, who were religious leaders in the mosque. He’d heard the stories of this contested stretch of 187 feet of huge limestone blocks. Muhammad tied his winged steed, Buraq, to this wall before he ascended to heaven to speak with God. It was a holy place.

Nabil told them it was part of the retaining wall that surrounded the Temple Mount where Herod’s temple stood and was the closest existing spot to where the Holy of Holies has been. Omar wondered, Is this just a wall?

Omar followed the group up a steep hill and then turned around.

At first he couldn’t speak. He was awed by the scene.

Then he suddenly blurted out, “God is here! The view from this side is really peaceful.”

Pastor Nabil read from the Old Testament about God’s command to build the temple. Omar looked at Nabil and said, “This is the true temple of God! I sense it! I feel it! I see it! This is the city of God and the city of the Jews.”

Meeting the God of Israel

The difference was night and day. Right then and there, the Holy Spirit created in Omar a heart, love, and passion for the Jewish people and Israel. He also truly understood God’s amazing love.

Omar fell to his knees and said, “This is the kind of Messiah and Lord that I want to follow — one of love, forgiveness, humility, grace, righteousness, and justice. I will have nothing more to do with the prideful God of Islam that hates, mocks, and deceives.”

Omar is just one of the many young Muslims who are coming to Christ through the ministry of local Christians in this region. Mature Arab Christians teach them and lead them down the difficult path that they will face among their family and friends.

Nabil said, “God is moving! The changes are phenomenal! Every time we take our Muslim converts to Jewish and Christian sites, we are filled with unspeakable joy. Through eyes of faith these new believers begin to see biblical truth and experience a newfound love for Israel, Jews, and Jesus!”