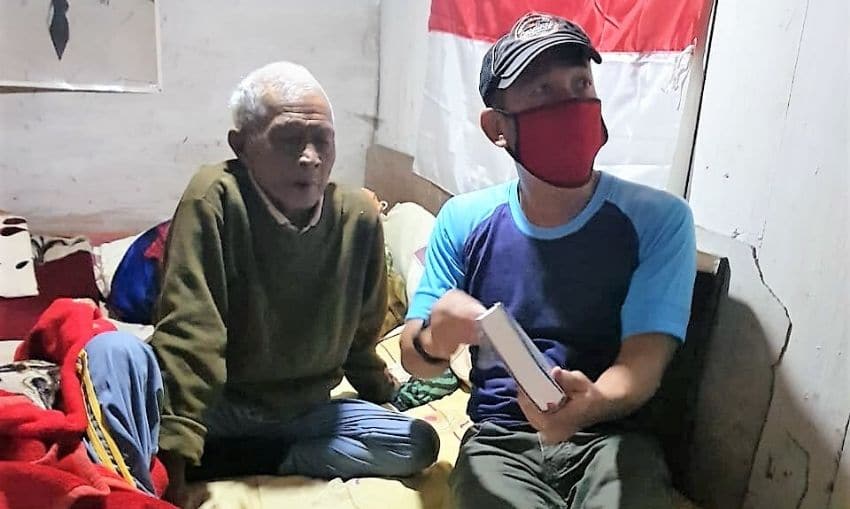 Satriyo was in his late 20s when he valiantly fought in the Indonesian War of Independence, his country’s armed and diplomatic struggle for freedom that raged from 1945 to 1949. He survived to see the end of Dutch colonial rule and the installation of Sukarno as his homeland’s first president.

Now at age 103, Satriyo is facing the grim reality of death. Infirmity and sickness recently confined him to his bed. “I know I have sins and I will have to account for them when I die.” This troubling thought lingered in his mind, keeping him awake and restless. He felt alone and had no peace.

In early April, missionaries from ANM’s ministry partner Gema Kalvari Ministries received a call from Wiyoto, Satriyo’s grandson. Almost 20 years ago, Joyo, the ministry leader, met Wiyoto and prayed for his deliverance from the bondage of the occult, leading him to Christ. Wiyoto now asked Joyo and his team to come and pray for his ailing grandfather.

The missionaries went to visit Satriyo and found him lying on a dirty bed in a very modest room. He was staying in the home of one of his sons. On one of the weather-beaten walls of Satriyo’s chamber hung two pictures — one of him in his military uniform and the other of President Sukarno.

For a centenarian, Satriyo could still hear well and speak clearly. He recounted to the missionaries many things about his life. He proudly recollected how he had fought for freedom against the Dutch Empire and had used amulets to protect himself from antagonists.

“I know that my involvement with the occult all these years has deprived me of peace and joy,” Satriyo sadly told Joyo. “In fact, I became an irritable man and would easily flare up for no reason.”

Satriyo was keenly aware that eternal life was not found in the occult. With his life ebbing, he was on a quest for the truth, and time was running out.

Joyo was all ears as the once tough and strong Indonesian soldier poured out his heart. He had compassion on the old man and wanted to share the Good News with him. He told Satriyo about Jesus, explaining to him who Jesus is and what He has done. Joyo specifically encouraged him with the Savior’s words in Matthew 11:28–30: “Come to me, all you who are weary and burdened, and I will give you rest. Take my yoke upon you and learn from me, for I am gentle and humble in heart, and you will find rest for your souls. For my yoke is easy and my burden is light.” The missionary put the verses in plain words until Satriyo really understood.

“Sir, I have told you that Jesus is the only Savior and Lord. He invites everyone who has burdens to come to Him. It doesn’t matter how dark a person’s past is and how many sins he has. Jesus is willing and able to forgive. Come to Him, and receive Him as your personal Lord and Savior, and He will give you eternal life.” Joyo gave Satriyo time to think and process what he had just heard.

“Do you want to accept Jesus as your personal Lord and Savior?” he then asked Satriyo.

Joyo asked further, “Do you want all your amulets to be destroyed as proof of your faith in God?”

The feeble war veteran then followed Joyo in the sinner’s prayer. Totally surrendering his life to his Lord and Savior Jesus Christ, Satriyo no longer felt the fear of death gripping his being. With Joyo and his team as witnesses, his amulets were burned and reduced to ashes.

Some of Satriyo’s grandchildren were present with their families, several of whom are new believers and had received Bibles from Joyo a year ago. Not wanting to waste the opportunity, Joyo shared the Word of God with them. He also encouraged them to read and memorize verses from the Bible.

Before leaving, the missionary team gave Satriyo a Bible and asked him to read it regularly. Rejoicing in the knowledge of Christ’s victory in the battle for his soul, the Indonesian warrior experienced a sense of peace and calm as never before.