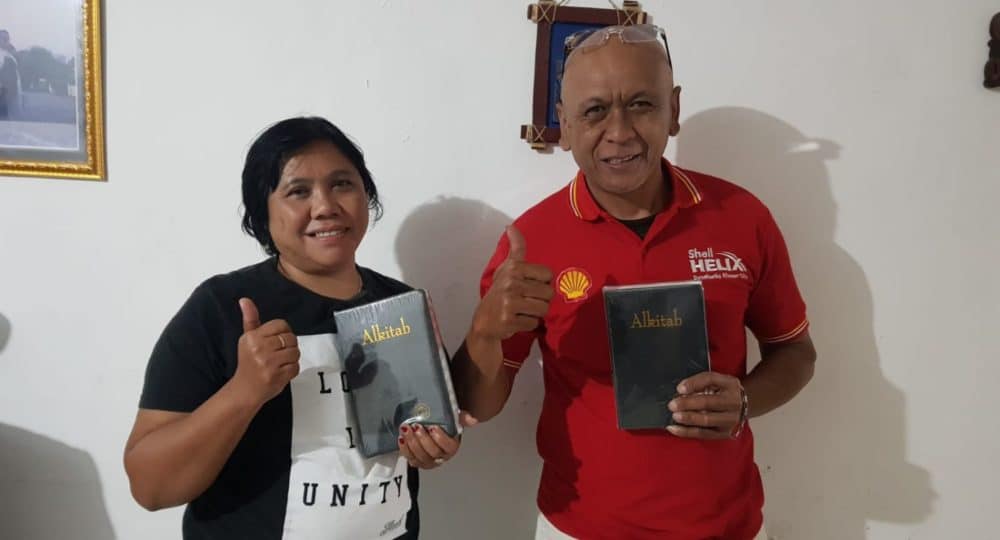 Aminah was disgusted with her husband, Ahmad. His temper was so violent that he would constantly rage at her and their children. She was relieved that he was not physically abusive toward the children — but he abused her. Nevertheless, she wanted the abuse to stop.

Aminah was very concerned with Ahmad’s occult practices, too. Ahmad had been raised by fanatical Muslims who hated Christians. He was very devoted to Allah, but this did not stop him from having a violent temper. He often argued with the neighbors. And the clashes with his wife and children seemed to be escalating. Aminah wished for changes to come to the family.

Even though Aminah had been the head of a Muslim women’s association in her area, she had questions about her faith. One day she had a conversation with another lady in her village. The lady was a Christian and told Aminah that Jesus could bring peace to Aminah and her family. That caught Aminah’s attention. She asked if someone could come explain more about Jesus and pray for her husband and family.

The Christian lady was an ANM missionary, and she contacted her co-worker, Guang. Guang called Muna, another missionary, insisting they visit Ahmad and Aminah in their village almost 25 miles away. Muna questioned why they needed to see this family in particular. Guang insisted the visit was necessary and urgent. Aminah was disturbed by Ahmad’s violent behavior and occult practices. She had pleaded for someone to come urgently and pray for him.

When Muna and Guang knocked on their door, Ahmad was not pleased to hear that the visitors were Christians. Muna reassured him, saying, “Sir, we are coming here to share the love of God with you. The Lord wants to help you and your family out of the pressure of life you are facing.” He shared about God’s love. Then he quoted Matthew 11:28–30: “Come to me, all you who are weary and burdened, and I will give you rest. Take my yoke upon you and learn from me, for I am gentle and humble in heart, and you will find rest for your souls. For my yoke is easy and my burden is light.”

Ahmad became very restless. Muna continued to explain who Jesus was and talk about His work of redemption for humanity. Then Muna quoted John 14:6: “Jesus answered, I am the way, the truth, and the life. No one comes to the Father except through me.”

Hearing that verse, Ahmad suddenly became very agitated. What happened next made it evident that an evil spirit was trying to prevent him from believing in Jesus. Ahmad clenched his fist, started grinding his teeth, and jumped around. He banged on a table violently. Muna and Guang tried to calm him down.

Eventually, Ahmad did calm down. After receiving prayer, the power of God cleansed him from all evil spirits. After he confessed his involvement with the occult, he chose to destroy all his amulets. The team continued to share about Jesus coming to save people and explained the dangers of the occult to Ahmad and Aminah.

Muslims come to faith in Jesus

Later, Ahmad and Aminah went to Muna and Guang’s village to learn more about the Gospel. The two men talked more about the dangers of the occult, then invited Ahmad to believe in the Lord Jesus. Muna exclaimed, “Praise God, the Holy Spirit touched the man, so he opened his life for the Lord Jesus. Let the Name of Jesus be exalted and glorified forever and ever. Amen.”

Muna and his team were glad they had prayed before visiting Ahmad and Aminah. Knowing they were facing people involved in the occult and Islam, they had prepared for the visit by fasting and praying to deal with the powers of darkness and by seeking the Lord before they went to the village.

How Can You Help?

ANM supports and equips more than 13,500 native missionaries in 112 countries. You can help missionaries like Muna and Guang to reach more lost people with the truth of the Gospel. Please consider donating to support them as they reach the world’s remaining 7,000 unreached people groups.