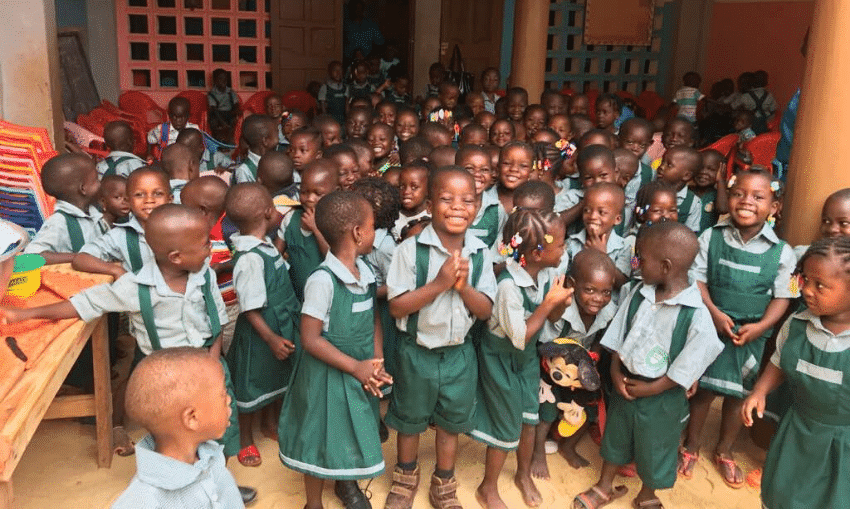 One-year-old Kodjo shrieked in pain as he received his polio vaccination, then suddenly everything went quiet. The doctor’s face went ashen as he realized he had severed a crucial nerve. Kodjo didn’t understand the word paralyzed, but he did understand the doctor saying, “He will never walk again.” The animists of his village believed he had been cursed. Instead of becoming bitter at the shunning and teasing, Kodjo felt compassion for others who suffered. Through determination and hard work, he began walking two years later.

Shortly after his 3rd birthday, Kodjo’s father, the breadwinner of the family, suddenly passed away. Unable to provide for her three children in their rural village, Kodjo’s mother moved to Lome, the capital of Togo.

Kodjo’s mom did everything she could, but they truly struggled. Kodjo remembers, “Life was miserable for us. At times there was no food or shelter. I wore the same shirt for three years. Momma would sell things and I could go to school for a time, but then I would be kicked out. The last thing she sold to further my education was her wedding ring. The sadness of being sent away from school because of poverty never left me.”

Feeling a gnawing need to help his family, Kodjo began washing clothes and selling things in the market at the age of nine. He continued selling anything he could and even used some of the money to finish high school with honors.

Vacation Bible School was offered every summer at a church in Lome pastored by an American missionary. This pastor led Kodjo to the Lord at the age of 12. He was baptized at 14, and at the age of 18, felt the call of God to ministry on his life.

His desire to care for people’s souls led him to earn a degree in theology. Then he taught Sunday school, preached, recorded a gospel radio and TV program, served as an assistant pastor, and worked as a missionary with Child Evangelism Ministries based in Indiana for eight years. He met his wife Abla in church and they married in 1998. God blessed them with three wonderful sons.

Kodjo wanted to change the impoverished situation for his family so he applied to come to the US for work. In 2009, he and his wife were offered jobs in a meatpacking plant in Ottumwa, Iowa, and a host family offered to take all five of them in. He promised he would one day return to help his people in Togo.

Kodjo had been interested in medicine since he was a child, so he decided to go to nursing school. Upon graduation, he applied to a Christian rehabilitation and skilled nursing facility called Good Samaritan Society. This job gave him the opportunity to do what he loved most: care for people. The residents love him. He talks, hugs, and prays with them.

But, he also cares for the people of Togo, especially the children. He and his wife, who had also gotten a better job, decided to live on her salary and use his paycheck to begin a ministry in Togo called African Kids Evangelism Ministries, beginning with a school. He did not want any little boy or girl to be sent home from school because they could not pay.

He purchased a piece of land and paycheck to paycheck, brick by brick he began. The school opened in 2015 with 99 students in grades preK-2. There they planted the seed of the gospel into the lives of the children.

ANM donors in Iowa brought Kodjo to visit ANM in Virginia and we discovered the heart of this humble, selfless man and came alongside him. Others in the ANM family heard of his dreams and also wanted to help add their support to Kodjo’s sacrificial gift to the needy in his country.

Today, a three-story building provides facilities to educate 1,200 students at little or no cost and classes go through the 12th grade. A church building where 300 people meet for worship also shares the land. Two churches that have been planted in Togo’s Muslim north are making incredible impacts. When another piece of land beside the school went up for sale, Kodjo was able to purchase it. A medical clinic is now being built, funded by a church in Virginia that visited Togo last year. When Kodjo was a child, medical care and education were the hardest things to get. The saving grace of Jesus was rarely heard. Kodjo wants all this to change for as many people as possible.

To provide extra revenue for the entire ministry, a chicken farm is being established.

ANM’s acting regional director for Africa, Lou Mancari, excitedly voiced, “All this has happened in just the past five years!  Most ministries take 10-15 years to get to this point. This is such a God thing.”

Good Samaritan Society also supports Kodjo, by allowing him three months’ leave every year to return to Togo to keep his ministry growing. The director of the center says, “You can see Christ working through Kodjo and through his spirit. You can feel it—in his smile, in his eyes, in the way he talks about the staff, residents and his mission.”

Kodjo’s caring character has not forgotten his wonderful Momma either. She is now living with his family in Iowa, caring for her grandsons.

When you ask Kodjo what he thinks about all that God has done, his only reply is, “My prayer is that God uses me as a good example.”

Paul writes in Ephesians 1:4, “For He chose us in Him before the creation of the world to be holy and blameless in His sight.” One man He definitely chose was Kodjo Bossou.