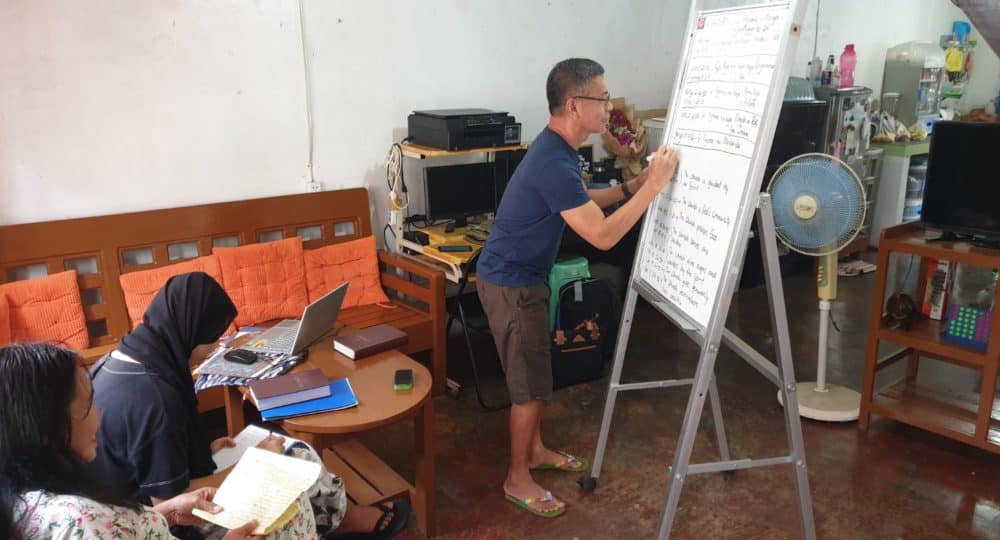 Farah’s life had already been difficult. She lost her father when she was young. Her stepfather was a drug addict and abusive toward her. He moved Farah away from her relatives and fought violently with her mother. Finally, her stepfather sent her back to her home village away from her mother. All of this added up to a lot of trauma.

Farah’s mother, Samira, met a missionary who befriended Samira when she was dealing with her volatile marriage. The missionary shared about Jesus, and Samira eventually became a believer. She gave up her Islamic beliefs and practices, began studying the Bible, and started telling others about Jesus. Eventually, Samira left her troubled marriage and returned to her home village to be with her children and grandchildren. While there, Samira became ill. She received traditional non-medical treatment, which did not help her recover.

The missionaries in the village were very concerned and urged Farah and her cousin to take Samira to the city for medical treatment. A missionary met Farah when she came to the city with her mother. The missionary asked Farah, “What do you know about Jesus?”

Farah explained that she and some of her friends had read stories from the Bible for a class. They had to answer questions about the Bible stories, but it was evident that the stories had not truly touched Farah. Her life was not changed. Farah continued to follow Islam, and she believed Jesus was just one of the prophets.

Samira was discharged after a week in the hospital. She and Farah stayed with a relative near the hospital to receive medication and follow-up instructions for her recovery. The missionaries visited and prayed for Samira at the relative’s house and saw Farah during each visit. When Samira recovered, she and Farah returned to their village.

One month later, another difficulty arose. An older Muslim school teacher offered a large sum of money to Farah’s relatives to take Farah as his third wife. In order to prevent the marriage from taking place, Samira moved her family two hours away and placed Farah in a different school.

The missionary team visited Samira regularly to coach her in the Bible and witnessing techniques. They invited Farah to join the Bible study. This time it was an actual Bible study and not merely reading Bible stories as literature.

After almost a year of participating in the Bible study, Farah shared the following with the team:

When I saw Mom reading the Bible, I browsed it out of curiosity. I didn’t understand anything at first, but because Mom said to read it, I obeyed. Mom showed me a set of stories that she said I should begin to read and share with others. That was what I did. But deep inside, I worried that Mom might not have been her normal self. So I went to the mosque and consulted the imam multiple times about Jesus and a few things I read from those stories.

One Imam warned me neither to touch nor to read the Bible again. Another said my reading was not bad, that those were the stories written by the Prophet, though [according to Islam] a lot of them have been [altered in the Christian Bible]. And, yes, [he said] Jesus is one of the prophets and Mohammed is the greatest [prophet]. That made me even more confused. Since I started coming with Mom to be with you guys, I had those questions on my mind, but by our studying the Bible together, my questions were answered one by one.

Yes, Isa is Tohan [Jesus is Lord], and the Bible is His Word. And studying it continually will make one know the real Allah more. … Please pray for my Mom and me that the people we will invite to study those stories will discover the truth we discovered before it is too late. Pray for my relatives to know [the true] Jesus in the Bible. Not only am I convinced Jesus is greater, but I also believe He is real and alive by the way He answered our prayers for Mom’s healing, Mom’s hearing aid given by someone we did not know, my schooling, and many more! Alhamdulillah! [Praise be to God!]

Farah has come to know Jesus as her Savior, and she is reading and making audio recordings of Bible stories for elderly people and those unable to read. Farah has been changed by the Bible studies the missionaries conducted with her and her mother.

How Can You Help?

You can be of help to the native missionaries who are working to reach lost, hurting children like Farah. Download the ANM prayer guide, “21 Ways You Can Advance the Kingdom Through Prayer.” This guide shares facts about regions of the world and specific ministries, telling you how to pray for their needs. Samira and Farah are part of the family of God because of prayers, missionaries sharing the Gospel, and donors giving for needs.

You can pray, knowing God hears your prayers. Will you pray?

Download “21 Ways You Can Advance the Kingdom Through Prayer.”