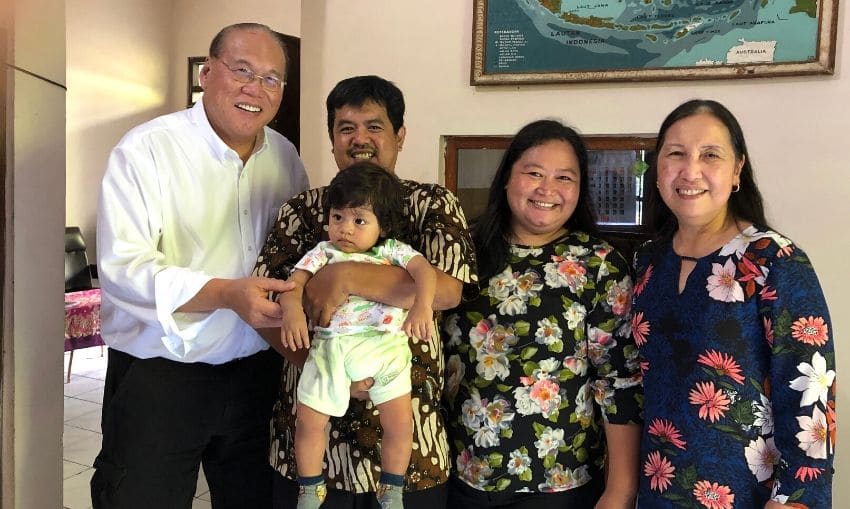 As she held her friend’s baby, Seti* lost herself in the sweet, milky aroma and gentle touch of the infant’s new, soft skin. The calm and comfort she felt cuddling this warm and innocent bundle filled her with joy and anticipation. Soon she would cradle her own child in her arms.

Worries became irrelevant as Seti savored the moment. She smiled serenely, a single tear of appreciation sneaking out of the corner of her eye. She and her husband, Wira*, had longed for a baby for a long time. Their only child was now 21 and away at college. How grateful they were that God was giving them another chance at parenthood.

Days later, Seti woke up with lower back discomfort and some spotting. She took it easy, but when intense cramping began, Wira rushed her to the hospital. Bleeding was heavy. The doctor quipped, “You are having a miscarriage.” Seti screamed. The hysteria caused her to push, and with one final outburst, she sensed something coming out of her. As the small body left her own, Seti felt drained of everything but grief. Guilt, depression, and heartache enveloped her and Wira.

After months of emotional struggle, Wira and Seti returned to the doctor to get instructions about trying again. The doctor’s words plunged them into sadness. “Your high blood pressure can cause a great deal of problems if you are pregnant. For the baby, this means less blood flow to the placenta, which causes the baby to get less oxygen and nutrients. The results are slow growth, low birth weight, and premature birth — even stillbirth. Your own body also suffers. You can have bleeding in the brain, kidney failure, and severe heart problems. Persistent headaches and nosebleeds, abnormal swelling, nausea or vomiting, and shortness of breath.” Because of Seti’s high risk, the doctor recommended that they have no more children.

In their disappointment, the couple made a choice to be grateful for all the good things God had already given them. With inspiration from Psalm 9:1, they repeatedly said, “We will give thanks to you, Lord, with all our hearts; we will tell of all your wonderful deeds.” They chose to rejoice in the midst of their circumstances and resume the work God had called them to do.

The Blessings of Acceptance and Trust

Both Wira and Seti work at a radio station in Indonesia that preaches the gospel to hundreds of thousands of listeners in a predominantly Muslim area. His father began the station in 1973, and when he died in 2000, Wira’s mother and wife joined him in continuing the ministry in his father’s footsteps.

Wira has a degree in economics and handles administration. He is also the technician of the team, repairing equipment and helping record various programs. His mom and Seti provide announcements, play Christian music, and offer advice on numerous topics from biblical matters to agriculture and health. They also respond to all correspondence from their listeners. All of them conduct home visits, where they talk and pray with the sick and lonely.

Hundreds of lives have been changed through the station’s broadcasts. A woman who had lost her husband wrote and said, “I am very grateful to God because when I listen to your station, I am comforted. It gives me strength to continue living, especially when I feel alone. The hymns and sermons that you broadcast are a wonderful blessing to me.” Another man who was struggling with health issues wrote, “I am very blessed with the spiritual programs on your station. I can no longer walk like a healthy person, but I am grateful that God has given me 50 years. Thanks to the Word of God, I can still give thanks to the Lord Jesus. These radio programs make me believe that the Lord Jesus always gives new strength and blessings.” As Wira and Seti continued to help others, real joy returned to their own lives.

A Miracle Is Born

Then the unexpected happened.

Seti discovered she was pregnant! It was early August 2018. Excitement filled the air. If it was a boy, they wanted to name the child Joshua, which means “Jehovah is salvation.”

Anxiety then took a front seat when Seti developed a heart arrhythmia that put her and the baby at great risk. By November she found herself in the ICU. Her pregnancy prevented the doctors from taking action, so they sent her home. ANM cofounder Bo Barredo and his wife, Marlou, visited the couple in January and had the opportunity to pray over Seti and the child.

Seti improved, but she had to return to the ICU again for four days at the end of the month. On February 14, after only seven and a half months, she went into labor. When the doctor evaluated the situation, he turned to Wira and bluntly said, “Your wife needs to have a C-section. However, she is so weak I’m not sure she will live through the surgery. You must choose between the life of your wife and the life of your baby. I will give you some time to decide.” The doctor then left the room.

Confused and frightened, Wira called his mother and everyone he could think of to get a prayer chain started. Seti was sent to the labor and delivery floor.

The doctor immediately rushed Seti to the operating room, not waiting for Wira’s decision. Incredibly, both mother and baby survived the C-section. They were taken to their respective intensive care units. Seven days later, Seti met her newborn son for the first time. After three more days in the hospital, she and Joshua “Miracle” went home. Today they are doing well.

Seti and her husband praise the Lord every time they look at their miracle child, a living testimony of God’s salvation. It has been said that a general attitude of thanksgiving both in life’s trials and in its blessings distinguishes a true Christian. Seti and Wira are true Christians, indeed.