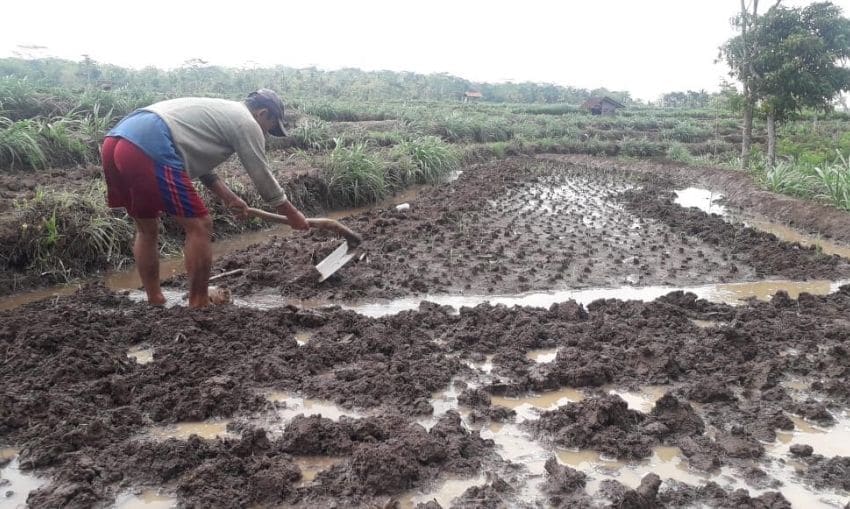 Can something that is made out of iron float in water? Not according to natural law. Iron is almost eight times denser than water, so it should sink to the bottom every time.

But our God is a supernatural God.

In the biblical account of Elisha and the prophets cutting timber by the Jordan, one man accidentally dropped his ax-head into the water. Dismayed because the ax was borrowed, he cried out to Elisha for help. “The man of God asked, ‘Where did it fall?’ When he showed him the place, Elisha cut a stick and threw it there, and made the iron float” (2 Kings 6:6). The man reached out his hand and reclaimed the valuable tool, marveling at what must have been an extraordinary sight.

One of ANM’s ministry partners in the Indonesian province of Central Java witnessed a similar miracle. Traditional Javanese farmers view agriculture as both labor and a spiritual duty. Traditional rituals accompany every stage of farming, including land preparation, planting, awaiting rain, and harvesting.

The predominantly Muslim farmers hated the fact that the minority Christian community did not practice these rituals. Since drought had been a problem in the area for the last decade, the ministry had initiated a drilling project for a self-sustaining well, funded in part by ANM donors.

The drilling began. Local opponents immediately started spreading false rumors about the believers and did all they could to sabotage progress on the well. One man threw an iron crowbar into the water hole to destroy the drill. A short time later, another man walked by, hoping to do more damage, but he spied something incredible. The crowbar was floating!

Word of the incident traveled quickly among the locals. They recognized that it was a miracle and that Christians must serve a powerful God.

The ministry leader shared with ANM, “The people have opened their hearts since the crowbar incident and we see a change in their attitude toward us. When we invite them to our homes for dinner and conversation, they come. Relationships are being built and we can now openly share the gospel.” What an encouragement this news has been to our partners in Indonesia.

Two more wells are now being planned, this time with local support.

Please pray as Indonesians come to see that the God of the Bible has given them the greatest gift of all: true living water — Jesus Christ.