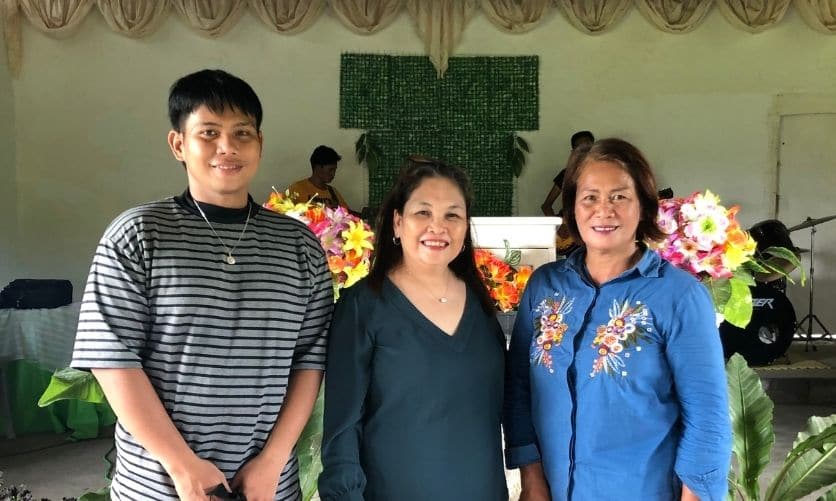 Week after week, Rebecca came to church Sunday morning and handed her offering to Pastor Danilo.

“Excuse me, I have to leave,” she told him. “I am so busy, and here’s my offering. One of these days, I’m going to stay and attend the service.”

Danilo and Emelyn, the husband and wife leaders of Natives for Christ Mission in the Philippines, prayed for Rebecca and her family, week after week. Rebecca’s family were Catholics who believed that they could earn their way to heaven through good works. Rebecca believed she was doing a good work by bringing her offering to the church, but she would not stay for the church service.

Rebecca is a politician from Mindanao who started her political career as a village council member. Later she ran for and was elected chief of her village. Now she is the liaison officer for the mayor’s office in a town in Mindanao. Rebecca, with her husband and family, lives close to the church Danilo and Emelyn started in Mindanao. Danilo passed away about two years ago, but his widow, Emelyn, continues to lead the ministry and the church. Emelyn has continued to pray for Rebecca and her family.

A Cry for Help

One Saturday in February, Emelyn received a call from Rebecca requesting that she come to Rebecca’s house to hold a prayer meeting. Rebecca sounded so desperate that Emelyn immediately went to her home. Arriving at the house, she learned Rebecca was burdened by fear because she had been receiving death threats due to her political activities. She was also experiencing all kinds of family problems: her husband was a drunkard and troublemaker, her daughter was addicted to gambling, and — worst of all — her son had turned to Islam. (Mindanao is predominantly Muslim.)

All these burdens were so heavy on Rebecca’s heart that she almost committed suicide, feeling there was no hope for her. She wanted to end it all. Emelyn told Rebecca, “You can find hope in the Lord Jesus.” Emelyn went on to share with Rebecca Jesus’s invitation in Matthew 11: “Come to me all you who are heavy-laden, and I will give you rest.”

Emelyn encouraged Rebecca to find true rest in Jesus.  She needed to surrender her life to the Lord. Rebecca wailed and wept like a child. Eventually, Emelyn led her in the sinner’s prayer. Rebecca gave her heart to the Lord that evening in her home.

The following morning, a Sunday morning, Rebecca was at church as usual.  However, she did not just come to turn in her offering; she stayed for the service. She shared with Emelyn that she had a good night’s sleep for the first time in a long time. All her burdens of fear and hopelessness were gone. Rebecca went to the front of the church, started crying and weeping, and declared to the whole congregation that she had surrendered her life to the Lord. The entire congregation prayed for her.

God Heard and Answered Her Prayer

Rebecca has consistently attended church since she accepted Jesus as her Savior. She convinced her son, who had turned to Islam, to come with her. He was hesitant, apprehensive that some Muslims in the neighborhood might see him in a church. This could have led to some dire consequences for him. The church members encouraged him to come inside, promising him that Jesus would protect him. So finally, he went inside the church, and on that same day, he gave his heart to Jesus.

Rebecca turns her cell phone off on Sunday mornings now. She has told the mayor, “If there are meetings on Sundays, you’ll have to schedule them in the afternoon because, in the mornings, you can’t find me. I am in church.” Her son still attends church with her.

After that initial Saturday prayer gathering, Emelyn began holding Bible studies in Rebecca’s home every Saturday. Rebecca’s husband attends the Bible study, and Rebecca has seen a radical transformation in his life, though he has not yet publicly confessed that Jesus is his Savior.

We thank God for these transformed lives because donors and friends have continued to support the work of native ministries like Natives for Christ Mission in Mindanao, now led by the widow Emelyn. You can help transform lives by supporting native missionaries who share the gospel in their hometowns and villages.