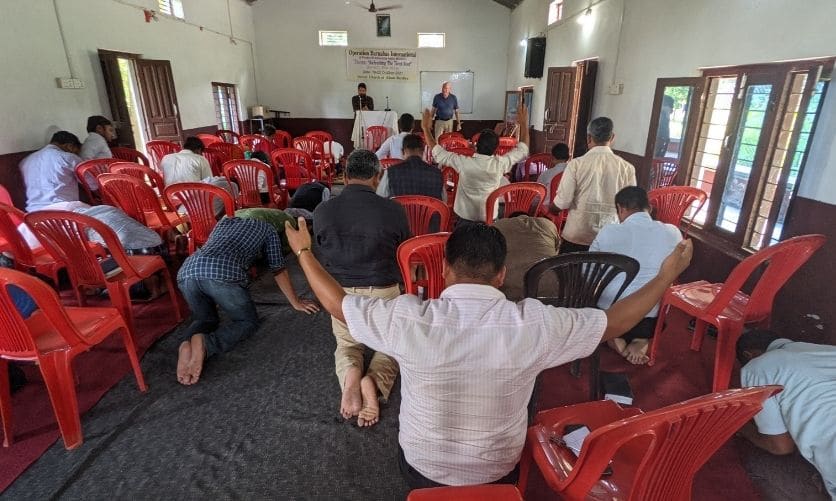 Karun* left his town in the Himalayan Mountains for the long bus ride to the Bardiya region of Midwest Nepal. The young pastor and church planter was headed to a three-day gathering of frontline ministry workers organized by Pastor Benny, a longtime Indian friend of A.M. Kuriachan, also a native of India, and ANM’s South Asia Coordinator.

As the bus traveled south from the mountains, the skies opened up, and torrential rain began to fall. It was October, usually the beginning of Nepal’s dry season, but the unseasonable deluge unleashed mudslides along many of Nepal’s mountain roads. Far from Karun’s destination, the bus encountered a mudslide that made forward progress impossible. A less motivated person would have given up and gone home, but Karun got out and began to seek an alternative route around the road closure. He walked for hours and finally found another bus route that would take him to the Bardiya region. In all, Karun spent parts of five days traveling to the conference, eventually arriving on the afternoon of the last full day.

I met Karun the next morning, during the final day of the conference in Bardiya.

On the Road with Operation Barnabas

Brother A.M. had asked Operation Barnabas Director Jerry Harding to conduct two encouragement conferences for Pastor Benny’s network of Nepali church planters. Jerry recruited me, and together with A.M., we met up in Midwestern Nepal. All three of us had our own travel challenges getting to Nepal. Both Jerry and I arrived one full day late because of delays or missed flights. A.M. became sick upon arrival in Nepal and had to miss the opening evening meeting in Bardiya. Nevertheless, God had a plan to encourage the 50 workers who greeted us on that first conference evening. Nepal’s predominant Hindu and Buddhist religious and cultural context makes their calling all the more complex and encouragement, therefore, all the more essential.

Encouraging indigenous leaders like Karun is one of the most important reasons why I travel to the nations to teach. My goal is never a simple transference of information from one brain to another. I aim to encourage the hearts of frontline native missionaries who face constant challenges and daily disappointments as they seek to remain faithful to their callings. It is a tremendous privilege to minister to such faithful workers. Karun could have given up when the bus encountered the mudslide. Instead, he found an alternative route around the blocked road. He needed the fellowship and the teaching, and he wasn’t going to be denied. What an honor it is to speak to such pastors and evangelists.

Another hour away in Tikapur, our second conference was almost canceled because of flooding in Midwest Nepal. Many pastors have small plots of land on which they grow rice or other crops. The flooding destroyed many of their rice paddies and even swept away whole homes, parts of villages, and roads. The organizers of the conference met to discuss the situation and decided to hold the meetings anyway. On the way to Tikapur, our vehicle was stopped by a washed-out section of the road. Hundreds of yards of the highway had simply been washed away by the flooding. A bulldozer was attempting to render the road passable when we arrived, but it did not look good for passage. Seemingly out of nowhere, a Nepali police officer arrived on his motorcycle and motioned for us to follow him. He led us through a still flooded but shallow path around the washed-out road. When we returned to the main highway, we asked him to remove his helmet and mask to see him. Smiling, he did so, and Jerry snapped a single fuzzy picture of our Nepali police angel. Karun also attended the second conference before returning to his mountain ministry assignment.

The Value of Long-Term Relationships

As I reflect on my time in Nepal, my first visit in almost three years, I think about the people who make this country so very special to me. After the conferences, I spent time in Kathmandu with many of our ANM native partners, including one man I met on my first visit in 1994. Brother Eliya and his eldest son visited me at the same hotel where I interviewed him 27 years ago. The spiritual and strategic value of relationships is so significant to successful ministry partnerships. An American pastor friend of ANM once said that “ministry moves at the speed of relationships.” Fruitful cross-cultural ministry must be built on a solid foundation of trusted and proven long-term relationships. I will now be able to add three more people to my long list of Nepal memories, Pastor Benny, a helpful Nepali police officer, and a persevering native church planter named Karun.