Bulgarian Missionaries Share Christmas with Muslims in their Homeland 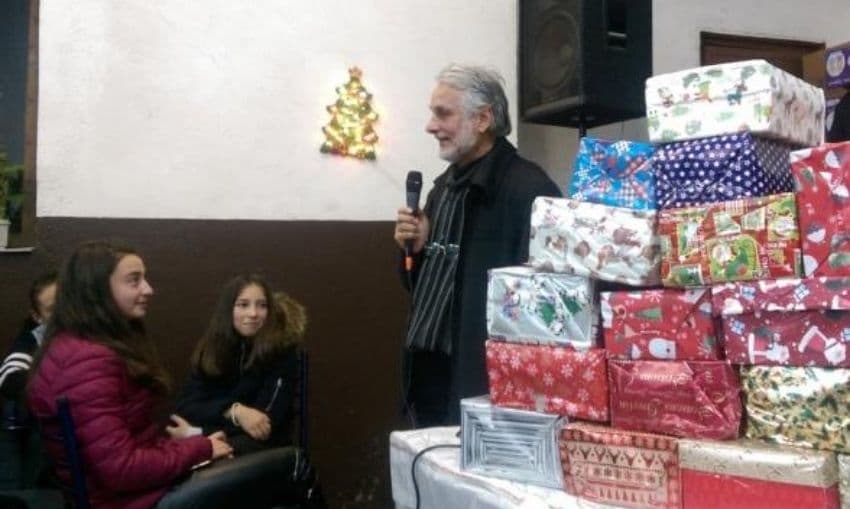 The sun gradually lifted the curtain of night. A biting wind was dragging the temperatures to a record low. Nature’s white sheet continued to fall in soft flakes. The fingers of Hari and Penka Atanasov ached from the cold, but their spirits were light as they continued to load the vehicle with Christmas shoeboxes.

Hari and Penka are pastors in the southeastern Bulgarian town of Kirdjali. Their town and the villages hidden in the surrounding Rhodope Mountains are home to thousands of Muslims, many of whom converted to Islam under the rule of the Ottomans. These mountains are labeled the least accessible region in the Balkans and one of Europe’s largest wildernesses. Today this couple was excitedly braving the elements and terrain to see friends and continue spreading the gospel.

Hari and Penka are also regarded as two of the most prominent Master Artists of modern Bulgaria. In 2008 they found a way to advance the kingdom in these beautiful mountains using their art.  Approaching a village mayor, they asked if they could launch a biblical art camp for the children.

“That would be wonderful!” exclaimed the mayor.

Hari and Penka arrived in the village nestled among the pines and rock formations with high-quality brushes and paints. They shared about the birth of Jesus: the census, the travel to Bethlehem, the birth in the manger, and the announcement to the shepherds in the field.  “And suddenly there was with the angel a multitude of the heavenly host praising God, and saying, Glory to God in the highest, and on earth peace, good will toward men.” (Luke 2: 13-14 KJV) They vividly talked about the whole miracle. The light, the glory, the shepherd’s fear, and finally visiting the manger were discussed.

“Now, can you paint a picture of this?”

Hari and Penka kept many of these paintings and then asked the mayors if they could return during December to explain why Christmas was celebrated. They offered to have a party and hand out Christmas boxes. Again, they were encouraged to come.

The climb into the mountains began. Thanks to donors from ANM, their four-wheel-drive van navigated the slippery, narrow roads. Potholes slowed their progress, and they often stopped to roll away snow-covered boulders. The mammoth icicles were magnificent, but they hung perilously over the road. They passed caves and waterfalls. Hari and Penka praised God for this opportunity and prayed He would be glorified in the time ahead.

In the village stood centuries-old stone houses. They pulled up to a newer, cinder-block building called the community center. Several hardy, cheerful men came out to greet them and unload the van. The heat from the wood stove was a stark contrast to the outside temperature, and the reception of warmth from the 30 children and moms brought insurmountable joy.

Hari and Penka arranged hard candies, cookies, and orange sodas on one table and shoeboxes on another. The children’s mouths began to water, imagining the different flavors, and their excitement grew as they patiently waited for things to start.

Using the artwork from the children’s art camps and some of their paintings, Hari and Penka reiterated the Christmas story and Jesus’ gift to humanity.

“Oh, I did that one,” voiced one child, followed by others saying, “That’s mine.” Proud parents smiled.

Families lined up to receive their boxes. When it was her turn, one woman meekly said,  “My daughter doesn’t need toys and candy. What she really needs is a pair of shoes.”

Hari had no idea what was in the next box, but he prayed aloud for the woman, asking that the child would find what she needed inside. He continued to hand out boxes.

Across the room, everyone heard, “There are shoes in here! And they fit!”

The line grew shorter and more boxes were opened. The linoleum did nothing to muffle the noise of match-box cars, pencils, soaps, and other treasures spilling out onto the floor.

Then another woman came and whispered, “My son needs a pair of shoes too.” Hari glanced heavenward and again prayed aloud over another box, which he handed to the hopeful mother.

“His God does answer prayer!” Another miracle happened. The young boy put on his perfectly-fitting new shoes and smiled the size of a watermelon slice.

Hari and Penka waved good-bye to the happy faces of families, the mayor, and the school principal. They breathed a sigh of relief and thanked God for revealing Himself in such a personal way. They praised God for this opportunity and prayed that the Lord again would be glorified in the 20+ other villages they would visit in the days ahead.

The sun sank behind the silhouettes of snowy peaks, and a lone wolf trotted across a rocky slope. Shadows stretched across the road. The light of Jesus shone in the van as they descended into the darkness.

Ralph Waldo Emerson once said, “Every sunset brings the promise of a new dawn.”

To Hari and Penka, tomorrow was another day to serve their Father, be it preparing a Sunday message, conducting prayer on Wednesday night, counseling a soul in their congregation, arranging an art camp, or delivering Christmas shoeboxes.