Widowed Refugee in Djibouti Amazed by the Love of Jesus 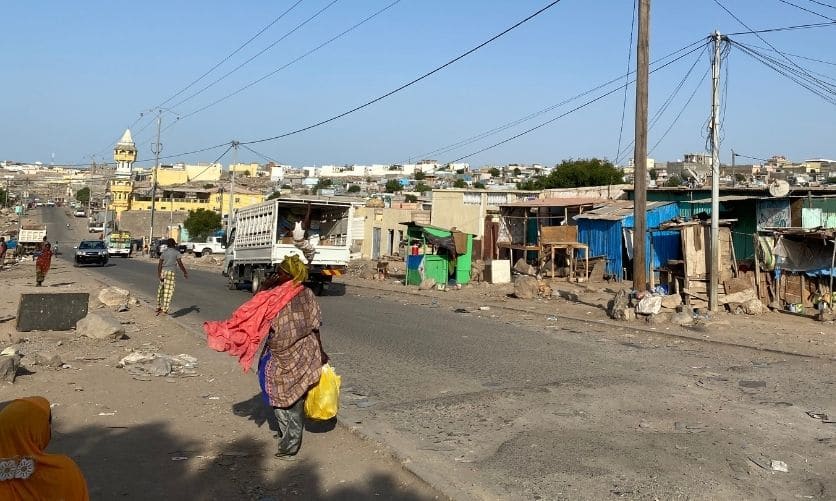 Sahra* dreaded going home to her three children with the news that her day spent begging in the heat on the streets of Djibouti had produced nothing. She hated the thought of their sad eyes and empty stomachs. No supper tonight, breakfast in the morning, or lunch tomorrow for any of them. It was painful to contemplate. Being a widowed refugee was such a challenge for her.

Suddenly, she became aware of a smiling Somali lady walking toward her.

Sahra was amazed that another Somali would approach her smiling. Sahra was part of the Somali Bantu tribe, despised in their native land. Even in Djibouti, they were shunned.

Waris asked what she was doing and, when she heard about Sahra’s plight, offered her food to feed her family. Amazed, Sahra accepted the food. She was bewildered by the love, acceptance, and help she received from Waris.

Jesus Is the Difference

Waris continued to visit Sahra, showing her love and helping her with food for her family and a way to earn money. One time, Sahra asked her directly, “Why are you doing this? You are not of the Somali Bantu tribe. Why are you different from others? I know you are Somali, and I am Somali Bantu, but people don’t like my tribe.”

Waris explained, “I love you because Jesus loves me.”

That comment settled Sahra’s mind. She wanted to know about this person, Jesus, who helped the Somalian missionary care for her despite being from a despised tribe. During subsequent visits, Waris told Sahra more about Jesus, and Sahra decided to accept Jesus as her Savior.

Microfinancing is a Blessing

Waris wanted to help Sahra have a better life with a more secure income than she could ever receive from begging. At first she got Sahra a job cleaning a house. Unfortunately, there were too many difficulties: Sahra had to travel quite a distance to get to work, transportation was expensive, she had to leave her children, and the job was only for one day of the week. Then Sahra expressed an interest in preparing and selling snacks, oils, and food on the street.  Waris asked Meseret Workelul, Administrative Assistant for Africa from Advancing Native Missions, if ANM could provide start-up funds to help Sahra launch a small business. The $450 Sahra received allowed her to establish an enterprise to support her family. ANM donors had given to make funds available for small businesses like hers.

Waris was excited to learn that Meseret was visiting. She wanted to introduce her to Sahra. When Meseret came to see her, Sahra exclaimed, “These Christian people, I don’t know them, but because of the love they receive from Jesus, they are loving me and taking care of me.” She further explained, “I can eat. I can have food in my house. I have never been hungry after that day [when she received the funds].”

Sahra was able to move to a better home, “better” being relative. When Meseret visited, she was amazed at Sahra’s thankfulness for such a primitive home. Sahra picked up the door and moved it to the side so they could enter her house. When they left, Sahra picked up the door and put it in front of the entrance to the house. The shack is so tiny that five people can’t stand in it simultaneously, yet Sahra and her two children live there. There were few possessions besides the one blanket folded on the floor in the corner that they use for sleeping. Sahra said it is nice to have shelter, but not going hungry is even better.

Now Sahra has a new dream. She has requested funds to purchase a refrigerator for her business. The climate In Djibouti is sweltering. She wants to sell water and other cold drinks to help her earn more money. She can sell water in used bottles she collects and refills, which is less expensive than commercially bottled water. She plans to purchase a mix to put in water to make a cheaper drink than soda. She needs $600 to buy a refrigerator to sell cold items in the hot, dry city of Djibouti.

Sahra has been reaching out to her neighbors and sharing about the love the missionaries have shown her. When Waris and Mereset visited her, Sahra introduced them to her neighbors. The neighbors were amazed that Meseret, a woman from the US, would come to see a Somali Bantu person.

Sahra told Waris and Meseret that her daughter, Awa, had married and was a new mother. She was not being treated well by her husband and his family because of her tribe. The mother-in-law allowed Awa access to only part of the house. She has to live in a separate area, while her husband, his mom, his two brothers, and their wives live in the other part of the house.

Meseret and Waris prayed that they would be a help to Awa after they decided to visit her. When the women arrived, Awa’s husband saw them come in and quickly called his mother to come to meet them. Meseret was concerned; she knew that the mother-in-law hated Awa. However, the mother-in-law was happy to meet Meseret. She went to get a special mat for Meseret to sit on instead of the floor.

Meseret said, “I am okay,” not wanting to cause problems.

But the mother-in-law said, “I won’t be happy if you don’t sit there. That’s my special mat.”

Realizing the gesture as an honor, Meseret thanked the mother-in-law and changed seats. The mother-in-law continued to interact with the visitors and her daughter-in-law, Awa. Meseret prayed, “Oh God, bring healing in this house.” They were hoping to show the love of Jesus to the whole family. After spending time with Awa’s in-laws, Waris and Meseret visited with Awa.

The Love of Jesus Transforms

Awa was amazed that Waris and Meseret had traveled by bus for almost two hours to visit her and her baby, Waris. (Awa named her baby girl after the missionary because of the love Waris had shown her mother, Sahra.) In the past in her mother’s home, Awa had often observed Waris, the missionary, hugging Sahra, her mom, helping her, showing her love. Now, they had brought her food, soft drinks, and baby clothes. That touched her. She told them, “I know my mom (Sahra) told me you believe in Jesus, and that’s why you are loving us; you have a big, kind heart for us. And I want to hear more about Jesus.” Waris shared about Jesus in her Somalian dialect, and after some discussion, Awa said, “I want to accept Jesus.” Meseret was privileged to see Awa confessing her sins and accepting Jesus as her personal Savior. Meseret said: “That shows how unconditional love, despite their tribe…you know Jesus loved us when we were his enemy, he loved us, he died for us.” That’s how the young woman, Awa, came to know Jesus as her personal Savior.

Give to Continue Transformations