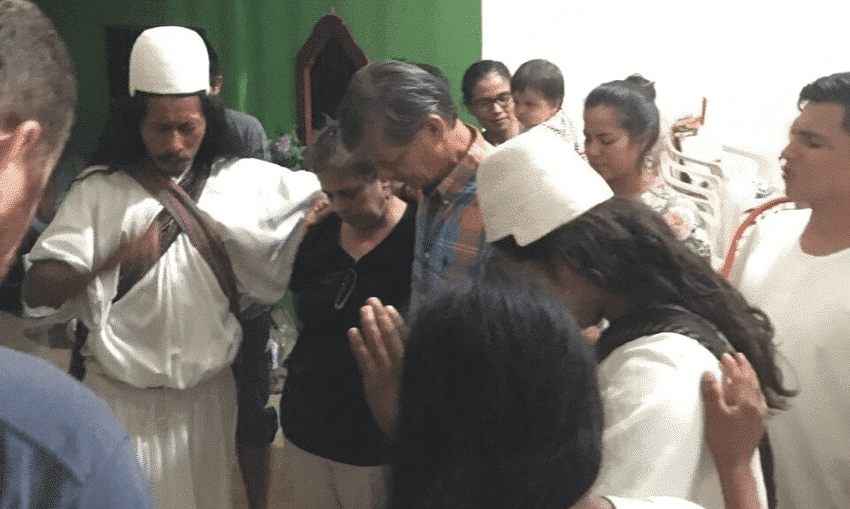 Today, only seven indigenous ethnic peoples in Colombia’s Amazonas region remain without access to a local Christian church. These are the most resistant to the gospel and hardest to reach, but our sovereign Lord is making a way.

For 42 years, Helman and Rosalba Ocampo (pictured above) have been taking the Good News to Colombia’s most isolated unreached groups. After 25 years of rejecting Jesus, the Arhuaco tribe finally opened their doors and hearts last year through a simple conversation about coffee. At the end of 2019, Helman reported that 24 Arhuaco people came to know the Lord and were baptized!

Helman and his team purchase the tribe’s coffee beans, minister to their children, and teach them English. Helman’s son-in-law started a church in the small town where the coffee is processed, and many Arhuacos are attending.

Two Miracles of Salvation and Healing

One Arhuaco tribesman named John who attends the church shared his story about coming to faith. “I was not sure I wanted to accept Jesus Christ as Savior, but I had a dream. In my dream, I saw Jesus and He extended His hands to me. My own were filthy, so I didn’t accept the invitation. The next night I had the same dream, but again felt too embarrassed and unclean to respond. When I had the same dream the third night, I readily put my hands in His. At that moment I felt a peace I had never known before and I was convinced I wanted to follow Him.” John then went to the church and asked how to follow Jesus and be baptized.

Another tribal convert testified of her miraculous healing. “I came to the hospital in Villavicencio with Hepatitis B, ovarian cancer, and chronic gastritis. My liver was shutting down and my eyes, gums, and skin were yellow. Helman and Rosalba Ocampo conduct church services in that city and I began attending on Sundays. I listened to the word of God and readily accepted Christ and was then baptized. I received lots of prayer and my body began to heal. I returned to the doctors and they said they could find no signs of disease. They said it was impossible, but they found nothing. I wept for joy. I am grateful to God that He allowed me to come to this place to receive healing in my body and my soul.”

This woman had come to Villavicencio because the Colombian government has a free government-subsidized healthcare system that allows tribal people to receive treatment at no cost. Not only that, but the medical care is excellent, rated the 22nd best in the world. As a result, mothers struggling with their pregnancies come. Parents bring their sick children. The Ocampos help them with clothes, food, diapers, hygiene items, and medicine. They visit the sick when they are admitted into the hospital or sent to hospice, praying for them and encouraging them. Then, on Sundays, all these people from different tribes are invited to come to Helman’s church.

God is sovereignly bringing the tribes to Helman! A multiplying effect results as these individuals return home. They tell their friends and neighbors of God’s miracles, and families are changed. As the gospel transforms their home communities, the nation is growing ever aware of the love of Jesus.

What Faithfulness Has Accomplished

Helman and Rosalba now have 450 churches in indigenous communities where worship takes place in 40 different languages. Their staff consists of 20 full-time church-planters. Over 130 indigenous pastors have graduated from their 12 training centers and camps and have returned to their tribes as leaders. The Ocampos’ team has also translated portions of the Bible into 26 of the 73 Colombian languages.

Colombia has seen a spiritual turnaround in the last four decades, thanks in large part to the effective ministry of Helman and Rosalba. Jesus told us to deny ourselves in this life and be willing to lose our lives for the gospel: “For the Son of Man will come in the glory of His Father with His angels, and then He will reward each according to his works” (Matthew 16:27 NKJV).

We believe the Ocampos’ reward will be great.