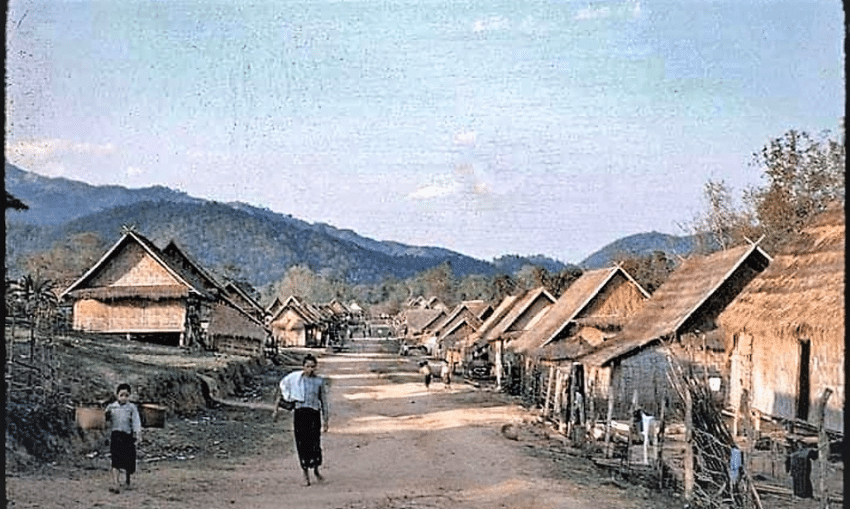 “God, I don’t understand why my son had to die now. He did not even get to see his father, whom he had not seen in years!” Soukita* mournfully cried, her chest heaving with deep pathos, as the tragic news of her son’s unexpected death reached her.

Soukita grew up an unbeliever. When she and her husband, Phant*, married and had children, they believed in animism, the attribution of a soul or spirit to plants, inanimate objects, and natural phenomena. Their home had no peace. Phant, an abusive alcoholic, would come home drunk and beat Soukita and their five children.

The family had a small buy-and-sell business. Phant would buy goods and sell them in other villages. One day, he traveled to peddle some merchandise. Unbeknownst to him, his last customer for the day was a Christian. As it was getting late, the Christian buyer invited Phant to spend the night in his home. That evening, Phant’s host shared the gospel with him, and Phant, deeply convicted, accepted Christ.

Early the next day, as Phant made his way home, his heart overflowed with joy. He couldn’t wait to tell Soukita what happened the night before. When he did, she could not believe what she was now seeing in her husband. For once, after a long time, he came home sober and exuded a sense of excitement.

Phant lost no time sharing with his family the good news he had heard the previous night. Beholding the joyful impact such good news had on this once-abusive husband and father, Soukita and the children readily gave their hearts to Christ that day. The oldest of their five children was 15 and the youngest, 11, when this happened. Their home, once packed with trouble, tears, and tension, now brimmed with peace, love, and joy.

The glorious message of the gospel gripped Phant’s heart so firmly that he felt compelled to share it with practically everyone he met. Whenever he went to the different villages to sell his wares, and people came to buy, he would instantly talk to them about Christ. That he lived in a country not open to the gospel did not deter him from witnessing at every opportunity he had. Before long, people came to know him as someone who freely talked about Christ, so they reported him to the police. This information led the police to conduct surveillance on Phant for three years. Eventually, they arrested him and put him behind bars.

Soukita and her family faced a difficult life following Phant’s imprisonment. She worked hard to fend for herself and their five children. “I felt I carried a lot of burden, but I didn’t blame God. I was still joyful and faithful in serving God,” she reminisced. She knew that with God on her side, she could face the hardest of situations.

When Phant was locked up, Soukita had no idea how he was doing. The police had placed him in isolation for a time, separate from the other inmates. “I didn’t know whether he was still alive. All I received was a message from my husband to be strong and not give up in believing God,” Soukita plaintively recalled. What she did not know was that her husband never wavered in his faith and passion for the gospel. He continued to share with his fellow inmates about the saving love of Christ. Several of them, moved by the power of God’s Word, gave their hearts to Christ.

“The Holy Spirit gave me the strength to serve God,” Soukita added. God’s presence, love, and grace carried her through the hardships of life without her husband by her side. She received several physical threats from the police and was summoned by the government more than 10 times and compelled to stop evangelizing and holding Christian activities. Soukita stood strong in Christ. She did not allow fear to paralyze her but instead chose to press on and continue Phant’s evangelistic work. In fact, when she was finally able to visit him regularly in prison, he would tell her the stories and the names of his fellow inmates who received Christ through his witness. Phant would then request her to visit these prisoners after their release to follow them up and share the gospel with their families. And this she did faithfully. Many of these ex-convicts became strong Christians, and a number of them have become church leaders.

But a tragic incident happened just before Phant’s release after spending 13 years behind bars. Their third son and his friends had gone to another district to do some electrical work on a house. On the way back, they came upon buffalos on the road. They stopped and watched the animals. Then the son suddenly fell ill. His friends rushed him to the nearby hospital and called Soukita. All she could hear was her son’s voice as he writhed in pain. He died not too long afterward for reasons still unknown to this day.

Soukita did not know why God allowed this to happen just 10 days before Phant’s release. Their children had not seen their father for 13 years. The deceased son was 26 years old, married, and had a daughter. Even though she could not comprehend her son’s untimely death with her human mind, Soukita never doubted God’s love and care for her and her family. She drew strength from God and submitted fully to His will. Her unwavering faith carried her through this adversity.

At the time of Phant’s imprisonment, the couple had three churches regularly meeting for worship. Her husband’s incarceration spurred Soukita to reach as many unreached souls as she could with the gospel. By the time Phant regained his freedom, Soukita already had additional churches she was leading. Many of them were fruits of the follow-up work she had performed for Phant, ministering to the former prisoners he had witnessed to while in prison. In 2019 she took charge of 74 churches in her province as provincial coordinator.

Soukita shares, “One of my joys in the ministry is knowing that in spite of the unfortunate things that happened to my family, we are in God’s hands. Serving God has given me a large family of many friends, brothers, and sisters in Christ around us, taking care of one another and helping one another.”

Her greatest challenge is the government’s law that continues to be restrictive and does not allow the gospel to be shared with the country’s tribal groups, almost all of them unreached. She feels a deep burden for 12 of these groups in particular. Persecution is still a reality — villagers destroy the crops of believers, making them suffer so they will renounce their Christian faith, and the children of Christian leaders are not allowed to study in many of the local schools.

Your donations to ANM play a vital part in equipping and encouraging missionaries like Phant and Soukita who, notwithstanding persecution and repressive laws on their mission field, boldly wage war against the forces of darkness to bring the light of the gospel to their people.