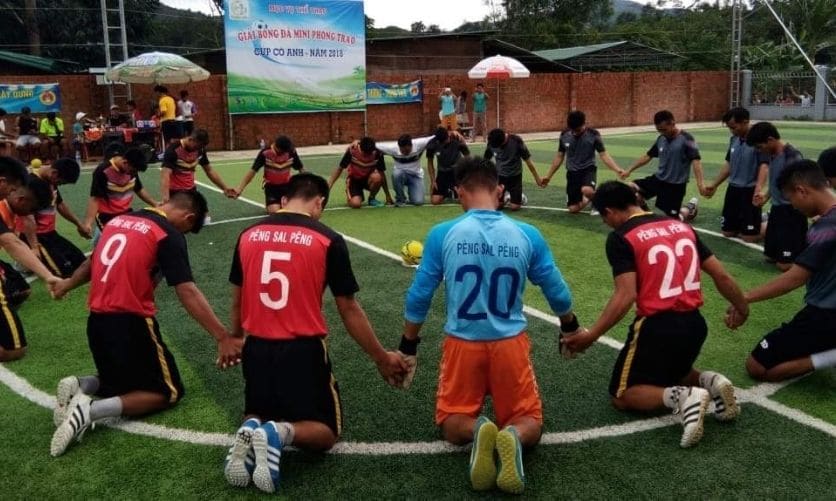 An-Ten strutted onto the manicured Vietnamese soccer field, raising his hands and bowing to the crowd. His jubilant fans waved national red and yellow flags, held flares, and banged on pots and pans. Every seat in the huge stadium held an admirer. Smiling at the cameras that broadcast the game into cafes, pubs, offices, and factories, he gave them all a thumbs up.

The importance of money and success drove An-Ten’s day-to-day self-inflated behavior. He criticized others and rejoiced in their failures. Winning was everything. On this particular day he glanced at the referees, knowing his bribes guaranteed victory.

The soccer regulatory body, FIFA, calls soccer the “World’s Game,” but in Vietnam, soccer ranks as a sport from the gods. Not only is it the most popular sport in the country; it is also linked to their national identity. In a move to overcome their negative reputation brought on by the Vietnam War, the country launched a successful national soccer team. This move restored a positive image on the international stage, boosting Vietnamese nationalism. This year their national team is competing for a place in the 2022 World Cup.

The fervor the Vietnamese have for this game caused Pastor Tuy, a native missionary partner of ANM, to use it as an evangelism tool for youth. Using sports as a vehicle to share Christ has been practiced for centuries, but it had a resurgence in the 1950s. Today, some form of Christian sports ministry exists in 180 countries. Tuy follows simple guidelines of skills training, sportsmanship, relationships, and the truth of the gospel. He promotes discipleship and then equips born-again players and coaches to go elsewhere in the country and do the same.

Tuy began with summer camps. Most individuals in Vietnam believe that Christianity is only for people who are poor, are stupid, or come from the lower class. If Tuy could persuade his famous childhood friend, An-Ten, to be his coach, it would attract many youths to his camps. Then he would have the chance to share the gospel and raise their image of Jesus.

When Tuy approached his friend, An-Ten laughed and said, “Sports are sports and ministry is ministry! I play sports! I want no part of this!” Years before, An-Ten had offered to play on another friend’s church team as a lark. During that match, An-Ten fought with the pastor, challenged the referees and opponents, and cheated to try to win the game. His tactics were not a good fit for Christian teams, so he refused Tuy’s invitation.

With love and patience, Tuy persisted, saying, “Come on. Try it. If you use your talent for His glory, God will do His part.” An-Ten continued to say no, but Tuy didn’t give up. He continued to share with An-Ten about the Lord, His love, and the vision Tuy had for the youth. An-Ten felt as lost as a turtle without his shell and found the information as exciting as a soggy handkerchief.

Three years later, Tuy said to An-Ten, “Love can’t walk through a door that is shut and locked, but if you open it just a crack, love might sneak inside and surprise you.” An-Ten felt that love and finally decided to open the door of his heart and totally submitted himself to Christ.

Discovering Jesus filled him with joy and purpose, and he latched on to the gospel like a clinging vine. As his love, understanding, and confidence grew, he let go and fell into the arms of his Savior. He realized his wrongdoings and selfishness and dedicated his talents to serve God. He is now a full-time coach in Tuy’s ministry and also a missionary. His new church welcomed him as a youth leader, and he even enrolled in a theological college to better equip himself.

In 2020, through the ministry of soccer, An-Ten planted 65 churches, baptized 200 youths, and saw 500 people commit their lives to Jesus. He excitedly shares, “With each new team, you essentially create a new congregation without the barriers of a traditional church.”