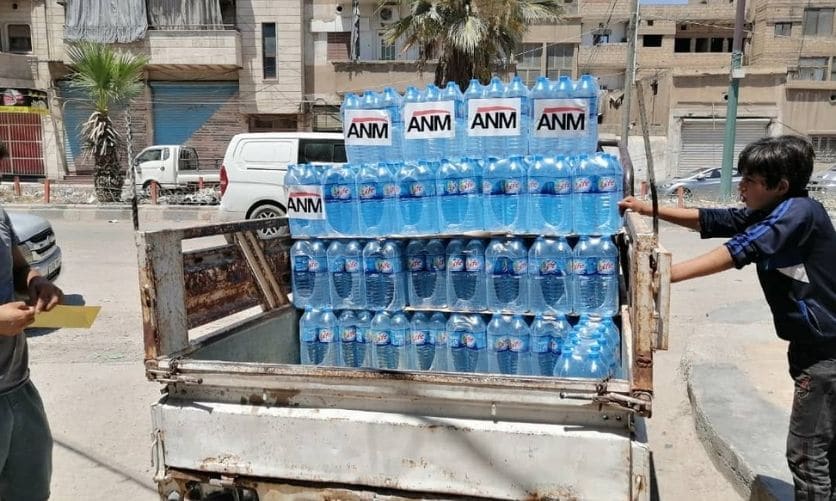 It is exciting to learn that the money you give to missions makes a difference in the lives of the people who receive it. Here are some stories that show how gifts to the ANM Gift Catalog, or ANM in general, have helped someone in need.

Bottles of Water Lead to Salvations

Several months ago, our Regional Director for the Middle East shared the plight of some refugees in Syria. They were without food or water, in a very desperate situation. ANM started an urgent campaign to get them help. Many generous Christians gave clean drinking water through the ANM Gift Catalog.

It was so beautiful to see photos of the water bottles passed out by ministry leaders with the ANM logo on each one. The labels were there not to advertise ANM but to let the refugees know that it was Christians who were helping them. Over 100 refugee families accepted Jesus as their Savior because of the love shown and the help given to them by Christians.

Then something horrible happened. In the very same area, some ISIS prisoners escaped from prison and attacked the refugee camp. The terrorists killed about 150 men who had become Christians because of the water given by ANM supporters. The good news is that they are in Heaven because donors gave to meet their need for water.

Their families had to flee for their lives, leaving quickly with very little. ISIS destroyed their temporary homes, possessions, everything except what they had when they escaped. Some of the 30,000 people who fled didn’t have proper clothing or shoes. Again, because of the ANM Gift Catalog, there were funds available to immediately send the refugees shoes and warm jackets.

Can you imagine what it is like to find out you have cancer and need medication to live, but you have no money for the medicine? That is what the situation was for Brother A., a ministry leader in the Middle East. He has had cancer for three years. The catalog item that has helped him is the gift of medicine. ANM supporters helped provide his chemo medicine and other medications he needed for the past year to help with his recovery. The drugs have positively impacted his health.

Sister S. from Morocco was having difficulty seeing. Her glasses were not helping her any longer. She could not read, see well, or even walk because of her poor vision. At 25, she did not want to lose her sight. When she visited the doctor, he told her the only solution was to have immediate eye surgery. Thanks to the ANM Gift Catalog, funds were available through ANM for her surgery. Now Sister S. is doing very well, reading, and walking.

When our Regional Director for the Middle East, Karim Saleh, traveled to Lebanon a few months ago, he visited a shelter for refugee children. ANM’s native ministry partners have run it for the past five years because of supporters’ donations. They shelter about 85 Syrian refugee children from Muslim backgrounds who are now Christians because of the love and care they have received. The children are encouraged to be “salt and light” to other children in the refugee camps.

Karim met a boy at one meeting who had invited his friend and the friend’s family to come to the conference. The friend came up to the front to have people pray for him during the meeting. The boy’s family joined him as he received prayer. As Karim prayed, he realized the boy was demon-possessed. The boys from the shelter began to pray that the demon-possessed boy would be set free. He started shaking and fell to the floor.

Finally, the boy who had been demon-possessed was set free. Karim told him that he could now choose to live as he had in the past with no protection.  The demons would return stronger than before. Or he could have a bodyguard named Jesus, and the demons would not torment him anymore. He accepted Jesus as his protector and Savior. The boy’s father and the rest of his family accepted Jesus as their Savior because they recognized the Christians’ authority over the demons that had possessed the boy.

Small Gifts Have a Large Impact

Karim shared that the partners in Syria desire to provide evangelistic training for the refugee people who come to know Jesus as Savior. In the meantime, they encourage them to share their testimonies and begin evangelizing in the camps immediately. Frequently, people accept Jesus because of the simple act of being given water, being invited to a meeting, or being given shoes and jackets to keep warm. The refugees are in such desperate situations that small acts of kindness significantly impact their hearts and lives. Your catalog gifts create the opportunity for those acts of kindness to be accomplished.

Shop the ANM Gift Catalog to supply the next gift to impact a refugee for eternity.