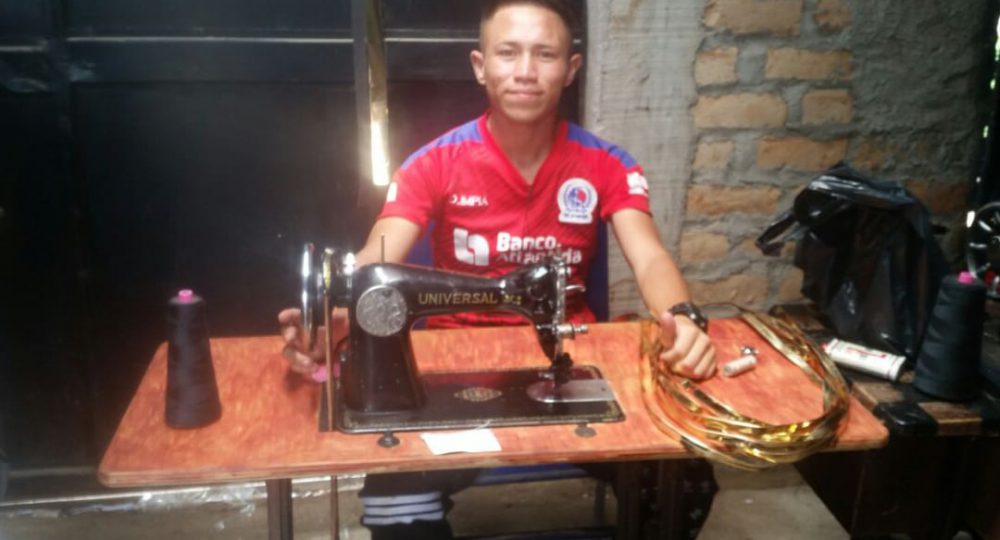 Walking down a dirt road among the patchwork of gang turfs in this corner of Tegucigalpa, behind a certain wall you can hear the loud hum of sewing machines. Inside, there’s a small room with a concrete floor and cement and brick pillars supporting the ceiling. Plastic trash bags hang from nails on the walls, each holding spools of thread, machine parts, or pieces of leather. The acrid-sweet smell of leather and the oily smell of lubricant permeate the space. On a hard tabletop, a young woman cuts leather straps. The young men at the two sewing machines will attach the straps to soles to make women’s sandals. Thirteen-year-old Brian Cruz sits at one of the machines.

Brian lives in a squatters’ village atop the Mount of Olives on the outskirts of Tegucigalpa, the capital city of Honduras. At night, gunshots echo in the dark unpaved streets like a posse galloping through town in an old Western. In the morning, police watch over bullet-ridden corpses left lying in the streets after the shootouts, and residents wash away the rills of blood flowing from the bodies. Passers-by cover their noses with their shirts to avoid the smell of death. Mothers wait at morgues for the bodies of their murdered sons and daughters, and families wail over the coffins of their loved ones. Violence doesn’t issue warnings here. Few here are likely to live long enough to have gray hair and wrinkles. Only one breath separates life from death.

Thousands sought refuge on this high ground in 1998 as Hurricane Mitch pounded Honduras for five days, causing flooding and landslides in Tegucigalpa. Most never left because of their poverty and the destruction of their homes. Soon afterwards, the Colombian drug cartels began to use Honduras as a key transit point on the way to Mexico and the U.S. Crime and corruption erupted as urban gangs—MS-13 and the 18th Street Gang—infiltrated this mountain area. Young people have suffered the worst, as gang leaders recruit kids as young as 10 or 11. To escape this fate, many head for the border.

Brian’s father abandoned the family when he was young. Brian’s mother sells tortillas to support the family. As the oldest of four children, Brian felt a gnawing responsibility to help. His choices were to join the gangs—and face almost certain death—or to seek safety and work in the U.S.

In 2011 a young Brian watched from the sidelines as Gustavo and Rose Souza set up cones and started playing soccer in a large field in the middle of the town. More than 70 kids flocked to the field.

Gustavo and Rose arrived from Brazil that year to begin a ministry called Love for Honduras in the Mount of Olives area of Tegucigalpa. They distributed food, clothes, and medical aid. But the work really took off when they acquired a field and began hosting soccer games for kids. Soccer opened the door for a discipleship program, including Bible studies, and worship events. Today kids come from 30 different communities around them and compete in tournaments. More than 200 soccer players hear the Word of God every Saturday. A program for ages 4–11 called “King’s Kids” meets twice a week. Kids are praying, crying, repenting, and being healed. A congregation of 120 now meets every Sunday.

Brian was drawn into this loving community. Then, just as he reached the age when he might draw the attention of the gangs, Gustavo and Rose offered him a new opportunity.

In 2018 a $500 gift from an ANM donor allowed Gustavo to buy two sewing machines and some shoe-making materials. A woman who is a local pastor offered a spare room in her home. Gustavo and Rose opened a small shoe factory and offered jobs to five boys, all from the soccer team or the church. Brian was one of those boys.

He rejoiced. Making $15 a day, he can stay in Honduras and help support his family with an honest job. He has also given his heart to the Lord, and a Brazilian missionary at the church is teaching Brian to play the guitar so he can help lead worship for the church.

Local stores around Tegucigalpa request the factory’s custom-made shoes; word of their excellent work is spreading. For Brian and others, a small investment has made a huge difference. God’s love is replacing hate. Gustavo has provided young people with a choice—the choice between life and death.