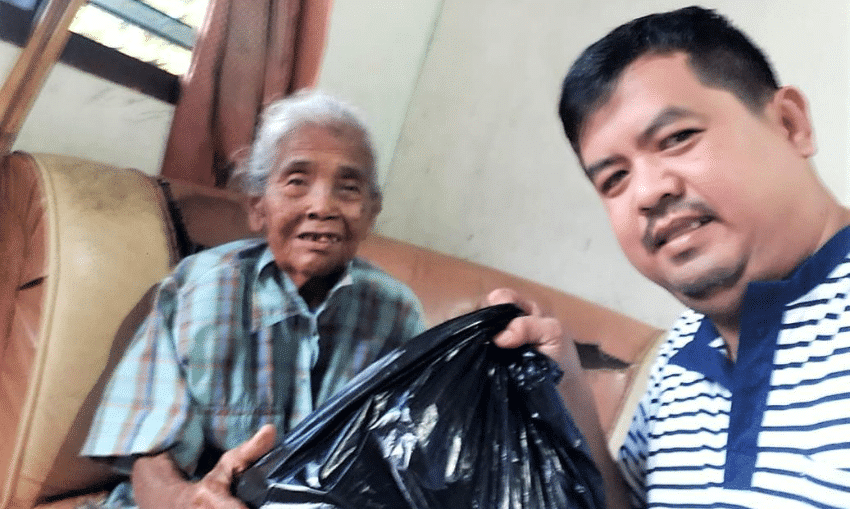 As people worldwide struggle in the wake of the COVID-19 pandemic, three stories from ANM partner ministries in Southeast Asia remind us that God always provides for the spiritual and physical needs of His children. From Indonesia to the Philippines, He continues to call, gather, and feed His flock.

“Thank you, God, because you saw…”

Eighty-seven-year-old Melati* lives in a city in Central Java, Indonesia. A former Muslim, she came to faith in Christ some 10 years ago and followed the Lord in water baptism five years later. She resides with her children and grandchildren and is the only believer in her family.

When Melati was young, she hated Christians and threw stones at a home church near her house, wishing the worship service would stop. Many years later, sick and confined to bed, she accidentally discovered Christian radio. The Voice of Zion, led by Wira*, is a radio ministry in Central Java and an ANM partner. One night, Melati listened to a program about the story of Jesus healing a bleeding woman. Her heart was touched by what she heard, and she became intrigued by who Jesus is. Since then, she has become one of the many dedicated listeners of the Voice of Zion’s broadcasts.

Melati’s faith grew, and she decided to believe in Jesus as her Lord and Savior. She even went to the home church where she had thrown stones many years before — as it turns out, a ministry that had been started by Wira’s mother. Melati testified that she wanted to follow the Lord Jesus for the rest of her life. Wira later baptized her. He applauds the old woman’s faithfulness in following Jesus: “She diligently attends worship services despite her frail health. She is also one of the loyal listeners of our radio broadcast.”

Indonesia, the fourth most populous country in the world, is emerging as the next coronavirus hotspot with a rapidly rising COVID-19 infection rate. The economic fallout there is so severe that people already living in impoverished conditions are suffering even more.

Melati is very poor and barely subsists on her son’s meager earnings from selling food in a small stall. The only Christian in her village, she has been shunned by her neighbors. When the government distributed food aid in her area recently, everyone in her community received their share except Melati. One of Wira’s friends overheard the head of the village, saying, “Why do we have to give assistance to Mbah [meaning Granny] Melati? She is not a Muslim; she is a Christian. We don’t need to give her food!”

But God’s grace is extraordinary, and His providential care is timely. Because of generous donors to ANM’s COVID Relief Fund, Wira and his team were able to visit Melati and provide food and other necessities for her family. The missionaries’ care and kindness deeply touched this elderly and faithful Indonesian Christian woman. She burst out in prayer, “Thank You, God, because You saw our situation and provided what we needed.”

The Voice of Zion team continues to monitor Melati’s condition to ensure that she gets the help she needs to survive during the pandemic. Your generosity is helping missionaries like Wira to extend material assistance to the needy.

In Malang, East Java, a militant Muslim activist from an Islamic boarding school, had an unusual dream. It was about Jesus. In the dream, he heard a voice saying, “Jesus was a True Teacher.”

Ahmad was baffled and confused. At the time, he was deeply entrenched in the occult. According to Islam, it is godly for believers to make contact with genies and other spirits. As long as the involvement is for a good cause, Allah must be in it. Questioning or digging deeper into who these genies and spirits are is not a concern.

Ahmad’s dream set him on a tireless quest for the truth. He looked for Christians who could explain to him who Jesus is, but he could not find anyone with a satisfactory answer to his questions. Ahmad left his hometown and traveled 200 miles to Salatiga, Central Java, to look for a job. While there, he met a pastor who knew Joyo*, the missionary leader of an ANM partner ministry.

The pastor asked Joyo to pray for Ahmad as well as to share with him about Jesus. Joyo and the perplexed Ahmad had long hours of discussion. He explained to Ahmad many things from the Bible, including who Jesus is, the origin of fallen angels (such as genies and other evil spirits), the dangers of occultism, and the gospel of salvation in Christ.

Joyo observed about Ahmad’s dream, “Calling Jesus a True Teacher is not wrong. But Jesus is not only a True Teacher. He is also the only Lord and Savior of the world.” Joyo helped the seeking Muslim understand by using the “bridge of salvation” illustration. He asked Ahmad to read specific verses from the Bible and taught him scriptural truths about the occult.

Lastly, Joyo invited Ahmad to come to Jesus and receive Him as his personal Lord and Savior, quoting Matthew 11:28–30. Ahmad opened his heart and committed his life to Jesus, and Joyo prayed for him. As they prayed together, the power of Jesus delivered the once Muslim activist from all the evil spirits that had possessed him for years. Ahmad finally had irrefutable proof that Jesus is not only a “True Teacher” but also the One who has complete dominion over demons.

When Ahmad’s family learned about his conversion, they were angry and told him not to return home. Ahmad’s wife, enraged by her husband’s change of faith, left him. She and their daughter, a junior high school student, went back to live with her parents. A zealous uncle, determined to force Ahmad to return to Islam, is still looking for him.

But Joyo encourages Ahmad to be strong in Jesus and to share about Him with his family when the Lord opens the way. By giving to ANM’s missionary cause during the COVID-19 pandemic, you can help Joyo provide Ahmad with monthly financial support until he finds a place where he will be accepted to work.

“I’ve tasted…delicious food I had never eaten before!”

Pastor Abner was in a quandary — how could he feed his family?

Because of the government-mandated lockdown in response to COVID-19 in the Philippines, Abner’s church on the island of Samar had to close indefinitely. Church closures throughout the region, one of the most economically depressed in the Philippines, have meant hardships for many poor pastors like him and their families.

On the very first day of the lockdown, Abner heard a knock at the door of his home, which is right next to the church. Not expecting visitors, he wondered who it could be. Abner guardedly walked to the front of the house and opened the door slowly. Surprised, he saw a man and a woman standing on the doorstep. They were total strangers.

The man was a businessman visiting from Manila, almost 500 miles away. The lockdown order had overtaken him and his wife, and they could not travel home. They looked for a place where they could safely stay during the lockdown. When they saw a house close to a church, they decided to go there. It was the pastor’s house.

Abner graciously received the couple into his humble home. In return, his unexpected guests, so thankful for a place of refuge, amply provided for the pastor and his family for more than two months. Abner happily remarked, “I’ve tasted all the delicious food I had never eaten before!” He testifies that the businessman was like a raven sent to him by God at an opportune time.

Without question, God’s providence is at work in a hurting world — in busy cities and rural villages, during long years and in timely moments. He always gives hope to the outcast, truth to the skeptic, and refuge to the stranger who earnestly seeks Him.