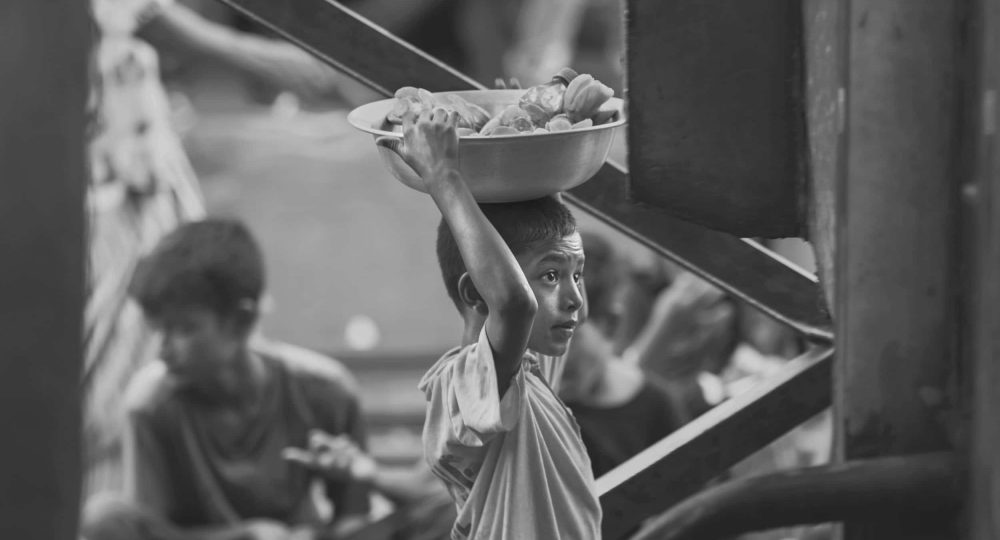 A child’s screams pierce the quiet night. More bad dreams. Toddlers wander aimlessly through the camp because they can’t sleep. Young ones crouch in the dirt near their makeshift tents. They no longer talk. Pictures of people with guns appear in the dust. Some never leave their flimsy shelters, too shocked of exhausted to move.

Why? Trauma. The American Psychological Association defines trauma as the emotional response someone has to an extremely negative event. It can cause a lasting impact on the victim’s mental, emotional, and physical development.

When Myanmar’s military and Buddhist vigilantes descended on Rohingya Muslim villages last August, they burned homes, shot anyone they could, and raped the women. Children froze in horror. Then they ran for their lives to the neighboring country of Bangladesh.

According to UNICEF, 60% of the 1.3 million refugees in Bangladesh are children. The international aid organization Save the Children reports that at least 30% of the refugee population in Bangladesh is younger than five. The United Nations says, “At least 5,600 households in the Bangladesh camps are headed by children who arrived without adult family members.” These vulnerable kids now face child labor, sex trafficking, and other kinds of exploitation.

Imams are constructing temporary mosques out of tarps as places of prayer and Islamic schooling, especially for Rohingya young people. Experts on Islamic militancy in Bangladesh say these schools have received funding from local and Middle Eastern extremist groups and they fear they could become centers of religious radicalism or Rohingya militancy to “get back” at Myanmar.

Christians respond to the need of Rohingya children

Where is the church in this grim situation? The church in Bangladesh has responded with immediate aid of food, water, and tarps. Young girls are especially vulnerable, so several Christian ministries have established sewing training centers. Those who complete the program receive sewing machines so they can have a way to support themselves and their families. Others organizations are teaching English, reading, writing and mathematics. Throughout these classes, the students are loved and listened to, and they hear the gospel.

Graduates from local Bible schools have formed small churches. As new believers mature, they are given a chance to attend these schools to equip themselves to reach more of the refugees.

One Rohingya believer makes a difference

“I want to help the children and start a church!” These are the words of a Rohingya refugee believer named Sona Mia. When he fled to Bangladesh, he immediately turned his own circumstances into an opportunity for missions. He comforted the children and showed them a smile every day. His bamboo-and-tarp home became a safe, happy place. He played games with them and gave them a sense of normalcy.

Sona Mia told them they had a Father in heaven who loved them and would never leave or forsake them. They could trust God. Sona Mia became a stable figure in their lives—and in the lives of their parents. The parents often listened to the conversations and asked questions. Some accepted Jesus as Lord and Savior, and Sona Mia faithfully taught this small group the Word. They worshipped together on Sundays.

As a refugee himself, Sona Mia was thrilled when he received permanent legal residency in India. But he didn’t want to leave his flock, and his congregation didn’t want to be left without a shepherd. After prayer and discussion, 17 families followed Sona Mia to Dehli, India.

Today, 34 families make up Sona Mia’s church of 150 Rohingya believers. He formed two full-time Christian schools for the children that cater especially to their emotional needs through songs, scripture reading, and other academics. The children also spend time playing, which provides healing, reduces stress, and helps brain development. One student was overheard saying, “I like it when Sona Mia plays with us. He is such fun. He makes me feel better when I am sad. When he tries to jump rope it makes me laugh.”

The Indian government is concerned that these Muslim refugees will be influenced by radical Muslims and perhaps be pulled into terrorist movements. Sona Mia hopes the ministry of Rohingya Christians like himself will show a different way. He dreams of having a separated community for Rohingya Christians and their children so they can grow in the Lord together.

“The frightened screams have ceased,” Sona Mia said. “The children sleep all night, and they now draw pictures of trees and rainbows.”