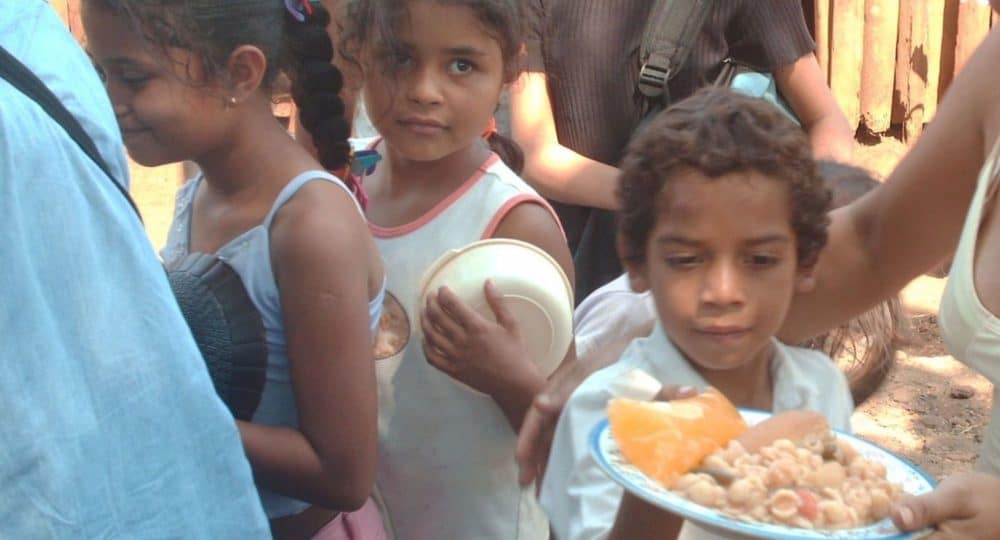 Sebastiana herded her fourth, fifth, and sixth graders outside the community school, shabbily built with pieces of metal and wood. The excited children awaited a special fun day sponsored by Samaritan’s Purse in their squatter’s village of Tipitapa, Nicaragua. Before the day ended, Sebastiana heard the Gospel for the first time but ignored the message and threw “The Greatest Gift” pamphlet she received in the trash. Watching her classes eat and have fun brought the joy she needed.

The Samaritan’s Purse team leader shared about this needy area with Advancing Native Missions’ native partner Yesenia Tigchelar, the director of Feed My Lambs, a feeding-center ministry that nourishes and educates children, aids families, and shares the Gospel in this Latin American country. Yesenia had prayed the Lord would lead her to a new area that needed care and the Gospel after Hurricane Felix destroyed her former center near Lake Managua. In late 2007, Yesenia opened a feeding station in a community called Santa Lucia in Tipitapa. Sebastiana’s two older sons attended. They came home singing songs about Jesus and quoting scripture. Sebastiana half listened.

The Beginnings of Change

Then came the differences in Sebastiana’s students. They acted respectfully, did their homework, and fought less. Enrollment remained steady and even increased because donors from ANM contributed enough extra funds to Feed My Lambs for the purchase of uniforms, books, and school supplies. Malnutrition lessened and attention spans increased. Curiosity caused Sebastiana to visit the center. She was greeted by smiling faces, loving arms, and cheerful children. She received a food box with a Gospel tract and heard the Gospel presented one more time. She showed gratitude, but did not respond.

Sebastiana gave birth to another son named Norlan. When he was five, he accepted Christ as Lord and Savior and came home crying. He was overwhelmed by the love of Jesus and all He had endured for him and all people. He told his Mom everything. She cradled him and spoke words of comfort, but rationalized, “What does a child really know?” Then Norlan got sick and was rushed to the hospital. Yesenia and others from the feeding center supported her in the hospital while she waited to hear from the doctor. He finally reported that Norlan suffered from a burst appendix and had died on the operating table.

Wailing and screaming, “No!” Sebastiana rushed to her son. She clutched his lifeless body to her chest and wept. Then monitors began beeping, confirming he had come back to life. She gasped. She finally questioned, “What just happened? Did Jesus do this miracle? Is He the Savior? Is He real?” She questioned but didn’t accept.

One afternoon Sebastiana returned home to find her alcoholic husband sprawled out on her couch. He’d been gone a long time, and only returned home when he wanted some of Sebastiana’s hard-earned money to support his addiction. She ran to the feeding center for help. When the team prayed for her, she felt hope and peace. She suddenly realized her sin and the sadness she had caused Jesus by rejecting Him. Falling on her knees, she cried out for His forgiveness and mercy. She finally understood the grace of salvation.

Her husband was gone when she returned home, but years later when Sebastiana was grounded in her faith, he showed up during a Feed My Lambs’ marriage conference. A couple from ANM spoke, and he went forward for prayer. Miraculously God delivered him! His desire for alcohol vanished, he accepted Christ as Lord and Savior, and he began looking for work. Today he has two jobs, supports his family, and has taken spiritual leadership in the home.

In 2015, Feed My Lambs began graduating students who went on to further education or vocational programs. The government took notice and blessed Tipitapa with a sturdy school structure.

As Christians multiplied, they had a need for a meeting place. An evangelical church now stands near the school and feeding center. It is full every Sunday. Today Tipitapa is no longer a shanty town but a thriving Christian community, thanks to the impact of Feed My Lambs.

Sebastiana says, “The feeding center saved my life and supported me throughout my spiritual journey. God is the only powerful One and without Him, we can do nothing. I thank Him, Feed My Lambs, and Advancing Native Missions. To God be the glory!”