Missionaries in Myanmar Care for Lepers by Eating with Them 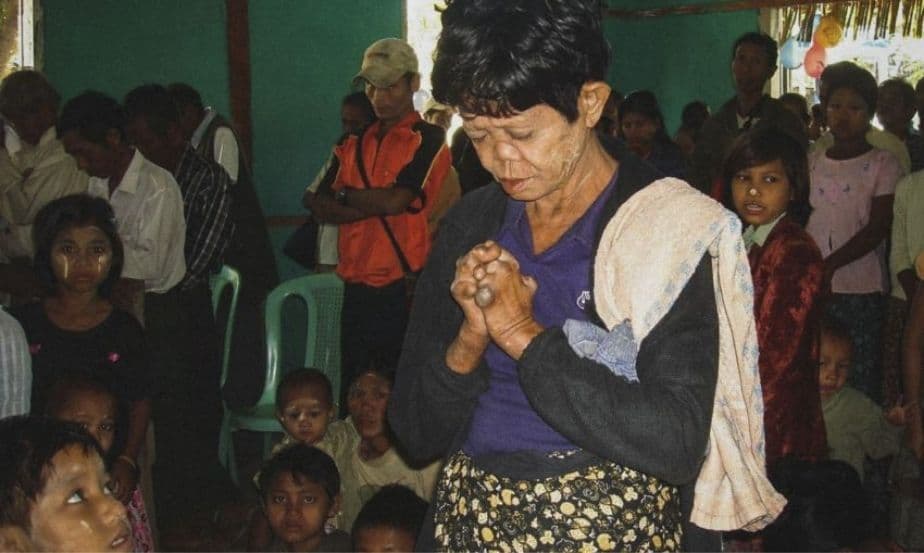 As Sharon approached the leprosy colony, the foul odor wrapped around her. She struggled to control her gag reflex.

When she entered the colony, a smiling woman greeted her. She only had three of her fingers and four of her toes. Half of her nose was gone and large rough lumps dotted her face. White sores on her arms oozed puss. When Sharon shook Mya’s hand, it was sticky. Mya’s leprosy was doing its nasty work.

Leprosy is a chronic, progressive bacterial infection that produces skin ulcers, nerve damage, and severe disfigurement. The first known written reference to leprosy is from 600 B.C.

Even though Sharon knew it only spread through sneezing and coughing, her stomach churned as she watched Mya prepare a salad that she suspected was for her. Of all the ministries that her late father had left in her care, she doubted she could ever truly love these people. However, she stood there telling the lepers that Jesus was a God of love.

Mya continued to add ingredients to her salad. Sharon’s skin began to tingle and she thought ants were crawling all over her body. Silently she prayed, “Please God, give me courage and don’t let me throw up.” She had been offered a cup of hot water so she rationalized that if she drank the hot water after eating the salad, it would kill some of the germs.

“Amen.” The lesson on love was finished, and Mya brought Sharon the salad. The lepers all gathered around to see what she would do. Everyone rejected them. If Sharon ate the salad, it would prove that she loved them.

Sharon brought the food to her mouth, trying not to show the disgust she felt. She swallowed and took a drink of the water. It had turned cold. She forced a smile and everyone clapped. She passed their test. She must love them too, just like her father.

Her father, David Yone Mo, founder of Myanmar Young Crusaders, was led to this 3,000-member leper colony by a young beggar he met in the street. His shock at their plight led him to share the gospel with them, and 15 lepers came to Christ that day. He was not equipped to heal their bodies, but God had equipped him to look after their souls. He began discipling them and showing them love and support. He eventually established a church in their midst.

In 2003, David died of cancer at the age of 59. He asked Sharon to continue his work among drug addicts, alcoholics, orphans, and these lepers.

Since that first day, Sharon has come to embrace these precious individuals. She now eats their food with gratitude, and laughs and cries with them as they deal with life. On the first Sunday of every month, she visits and shares God’s word with the 350 Christians in the large church her father built. Fifteen accepted Christ this year.

Many die every year from secondary infections and the extreme weather, but they know their Jesus and they know they are loved—by God and by Sharon.

Help those who are excluded by society know that they are loved.