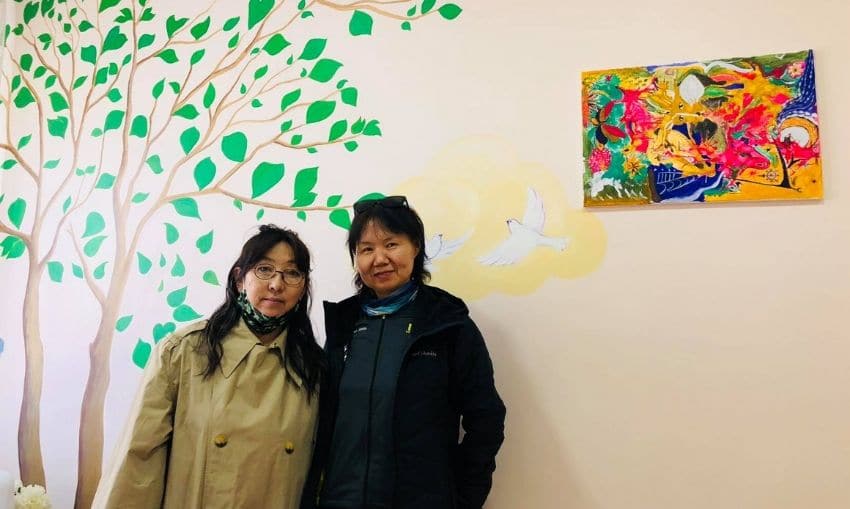 “The jolt of the news caused me to collapse and weep into my hands. I then arose like a robot and did what needed to be done.”

Baigalmaa had just lost her husband, Bataa, to a heart attack. She was aware of his congenital heart defect, but the shock of his death brought a surge of changing emotions. She knew that he was in a better place and she would see him again, but this knowledge did not take away the pain. She felt scattered, scared, and angry — like an amputee missing a limb.

Prayer and the Art of Grieving

Baigalmaa is part of Pillar of Unity, one of ANM’s partner ministries in Mongolia. Her husband was a famous Mongolian sculptor whose work is displayed in several museums. Bataa’s deepest desire was to share the gospel with his fellow artists, who were Buddhists. He had worked with them on many projects, including the design for the two horsemen sculptures that stand outside the present Parliament building in the capital city of Ulaanbaatar.

When Bataa died, not only did Mongolia lose an artist, but Baigalmaa lost her best friend, her Christian confidant, and the father of their four children — twin girls and two boys. She prayed that her grief would anesthetize her until she could adjust to her new identity in a world without Bataa.

But there was no escape from the pain. She prayed and read the Psalms over and over again, saying them out loud. “Be merciful to me, Lord, for I am in distress; my eyes grow weak with sorrow, my soul and body with grief” (Psalm 31:9, NIV). “You keep track of all my sorrows. You have collected all my tears in your bottle. You have recorded each one in your book” (Psalm 56:8, NLT).

The Holy Spirit heard the groanings of her heart and responded with love. At times, Baigalmaa felt wrapped in a soft, compassionate cocoon of His grace. He displaced her anguished cries with hope. God was her anchor, and the stabilizing effect of the Bible kept her moving forward.

The Lord then led her to two other Christian women who had lost their spouses. Immediately they connected. They all wanted to fulfill the calling that God had on their lives, so they encouraged each other to take His hand, let Him lead, and trust that His everlasting arms would catch them if they fell. The prayer gathering grew as other broken souls joined them.

An Artist’s and a Widow’s Prayers Fulfilled

During these times of prayer, Baigalmaa sought ways to honor Bataa and find a future. One day she saw herself on a path that she felt God was endorsing. Bataa had loved children, so she began “The Bataa Foundation,” a group of artists called to teach, encourage, and nurture art among the children of Mongolia.

Summer art camps were the first outreaches. Out of respect for Bataa, some of his artist friends joined and were exposed to the gospel. Baigalmaa then asked the Lord, “What other caring things can we do during the rest of the year?” He gave her another idea to help the nearby trauma hospital.

A hospital can be a frightening place for a child. Those who work at hospitals also need inspiration to keep on serving. Therefore, the foundation approached the facility with coloring books for the children and an offer to paint bright, colorful scenes on the hospital walls. The offer was gladly accepted.

They began by creating a joyful environment in the surgery unit. They also worked to make the psychologist’s office more peaceful and relaxing. Now, days are spent in the children’s wing painting large animals and beautiful flowers, which have put smiles on everyone’s faces. When anyone asks questions, Baigalmaa shares about Bataa and his testimony. The artists pray for the children, doctors, and hospital staff while they work. They are doing exactly what Jesus teaches in Matthew 5:16: “[L]et your light shine before others, that they may see your good deeds and glorify your Father in heaven” (NIV).

“God is the One who opened this door before us,” Baigalmaa told ANM. “Through this door, we have a chance to raise the spirits of doctors, make friends, establish connections, and show them all the love of Jesus. Please pray for this project that it will be a bridge to reach the lost. The hospital is trying to save bodies; we are trying to save souls.”

She still meets with her prayer group — the “Noble Ladies,” as she calls them. Not even COVID-19 has stopped them. They get up early and take their prayers outside. They walk and pray while practicing social distancing. No matter how long it takes to see answers, they keep praying. “Prayers, like eggs, don’t hatch as soon as we lay them,” Catherine Marshall wrote decades ago.

Baigalmaa would agree, but she also knows that anything can happen when we pray.