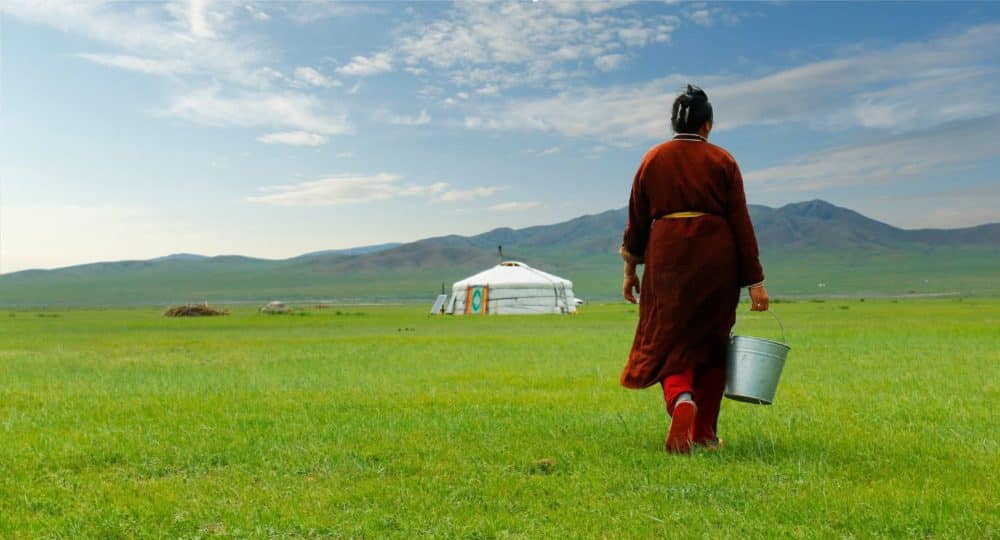 Batu sat by herself in her poor ger (a traditional roundhouse covered with felt and sheepskin to protect from the extreme heat and cold). She lived alone day after day. No one came to visit her. Batu was a widow. Being a widow is not unusual in Mongolian culture, as the women usually outlive the men. However, Batu had no children, grandchildren, or other relatives living with her. Mongolian culture is very close-knit, with extended families living and working together. Therefore, Batu’s situation was a rarity. Life was difficult for everyone, but especially for a widow living alone.

Living with your spouse, kids, and grandkids is hard enough in Mongolia. It’s hard because life is hard. In the winter, the temperature hovers around -40 degrees. There is only a short warm season, and there is much to do to care for livestock and plant a meager garden in the rocky, desert-like soil. But it was even more challenging for this widow without an extended family. She had no one to check on her. She could have died in her bed, and her body would not have been discovered for quite a while. Also, Batu was raised in a shamanistic culture with no comfort for her in her fear of evil spirits and witchcraft. All she had were days upon days of loneliness, fear, and depression.

Hope Comes with a Visitor

Batu was thrilled the day a local social worker came by. As Batu shared her situation, the social worker suggested that she needed to get out and meet people. Batu asked, “Where should I go? Who will I visit? How will I meet anyone?”

“You could go to the Christian church in the village,” suggested the social worker.

Batu explained, “I am not a Christian.” Like most Buddhists in Mongolia, Batu knew little about Christians, and she feared what she didn’t understand.

A few days later, Batu received a visit from the local pastor. He came to her house to give her rice and flour. She was amazed that with so much poverty, a stranger would care to share his food with her. Batu poured out her feelings of heartache and loneliness with him. She was encouraged by his visit and realized she was no longer friendless!

The pastor’s act of generosity and graciousness opened the door for Batu to attend the local church. It was easier to think of going now that she knew the pastor, her new friend. At the church, Batu met other Christians who showed her the love of Christ. Quickly she accepted Christ as her Savior and chose to be baptized. Finally, she had a family and had found a loving Father in God. From shamanism, Buddhism, loneliness, fear, and profound depression to Christ, a loving family of brothers and sisters, and hope, Batu’s life had changed for the better.

Sharing What She Has Received

For Batu to be saved at the age of 65 was amazing, but even more impressive is what she plans to do now. She is preparing to become a missionary.  She desires to share hope with the hopeless, love with the lost, and the offer of eternal life with those who are in the same darkness and despair she had experienced.

How did this happen to an elderly widow and a recent convert? In Mongolia, when people come to Christ, they are immediately introduced to missions and outreach. It is the vision of the Mongolian church to take the Gospel everywhere Genghis Khan spread his empire in the 13th century. That means they take it as a personal responsibility to share the Gospel where Islam, Hinduism, Buddhism, Judaism, and atheism abound. Genghis Khan extended his empire up into Siberia, down to India, as far east as Japan, and all the way to Europe. When Mongolians get saved, it’s not a question of are you going to do anything for the Lord? It’s a question of where are you going to go to share the Gospel?

Batu will soon go on a two-week trip to share the Gospel in another country. She already knows the language spoken there.

Your Help Is Needed

You can help Batu and others like her to spread the Gospel to people who have never heard the name of Jesus.

Download the “21 Ways You Can Advance the Kingdom Through Prayer” prayer guide. This 48-page prayer guide will share 60+ specific prayer prompts, plus cultural and historical content for each region you will be praying for.

The request ANM gets most frequently from missionaries is, “Please pray for us.” The native missionaries on the front lines need your prayer support to accomplish what God has called them to do. Will you pray for the next Batu to be an effective missionary—until all have heard the name of Jesus?

Download “21 Ways You Can Advance the Kingdom Through Prayer.”