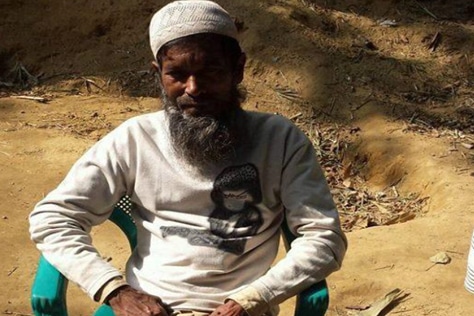 “No, that can’t be right. I must have this food for my three sons and my daughter.”

Habibur was pushed aside and yelled at in a language he didn’t understand. He pushed back, extending his hand toward the aid workers distributing the food from their jeep. But he wasn’t fast or strong enough to get through, and he had no other way to communicate his need.

Habibur is a Rohingya, born in Myanmar (formerly Burma). He and his family escaped Myanmar last year because of the government’s violence against the Rohingya. He was illiterate, living in a crowded, squalid refugee camp in Cox’s Bazar, a tourist destination on the coast of Bangladesh. People cheated him.

There are two kinds of Rohingya refugees now living in Bangladesh—registered and unregistered. The registered refugees are mostly those who fled Myanmar prior to the mass exodus that started in August of 2017. Habibur came later, among the more than 700,000 unregistered Rohingya who arrived in Bangladesh in the last ten months. Those who have a registered status receive aid from several sources, including relief and education. The unregistered are helpless.

Habibur learned about a rare opportunity—adult literacy classes for people in the camp, even the unregistered, but he was reluctant to go. He felt ashamed, wondering, “How could I go to school now?” A friend encouraged him. Finally, tired of being looked down upon and lacking ways to advance himself, Habibur consented.

The literacy classes were offered by Isa-e Church, a church network that has taken up the cause of the refugee. Isa-e Church was begun by a Muslim background believer named Mabud Chowdhury. As a devout Muslim, Mabud thought Christians were confused about religion. So he read the Bible, preparing to show them their errors. In the process, he discovered the free gift of salvation in Jesus. There were no churches for Muslim background believers like himself, so in 1999, Mabud and thirty other Muslim-background believers formed Isa-e Church Bangladesh. It is a ministry designed to spread the Gospel and provide social and physical relief to the millions of lost and desperate people living in Bangladesh.

Among these millions are the Rohingya. The Rohingya speak a language called Chittagonian that is different from the native language of Bangla. Isa-e trains school dropouts in its congregations to tutor illiterate Rohingya refugees in Bangla, and gives the tutors some financial compensation in return, which encourages the them to continue their own studies. Isa-e provides books and writing materials. Classes meet three times a week for one year.

Through Isa-e Church’s adult literacy program, Rohingya refugees are learning how to read, write, and do math in Bangla. They are becoming better communicators, gaining a sense of pride, and finding economic and social opportunities for their families.

Habibur says, “When I started I couldn’t even write my name in any language, but now I can read, write, and do calculations! I am grateful to my teacher and to Isa-e Church Bangladesh for giving me this opportunity.”

An opportunity to serve

Isa-e means “a believer in Isa (Jesus),” so during class the tutors tell their students about the one who died for them because he loves everyone. Outside the classroom, pastor-missionaries quietly go through the camps praying for needs and telling the residents about Christ. Many have come to the Lord. The ministry them to enroll in Isa-e’s Theological Institute, where they learn more about the Bible and how to witness to their Rohingya neighbors.

Bangladesh is 90% Muslim, which is one reason that the Muslim Rohingya flee there. Mabud sees this as a great opportunity to spread the word about the Prince of Peace among the chaos of the refugee camps. He and the Isa-e network have made such an impact that the community is taking notice—both positive and negative. One Muslim newspaper even published a warning about the ministry’s activities.

From an illiterate Muslim Rohingya to a Christian missionary—it’s quite a success story. Please pray for the rest of the Habiburs living among the refugees of Cox’s Bazar.