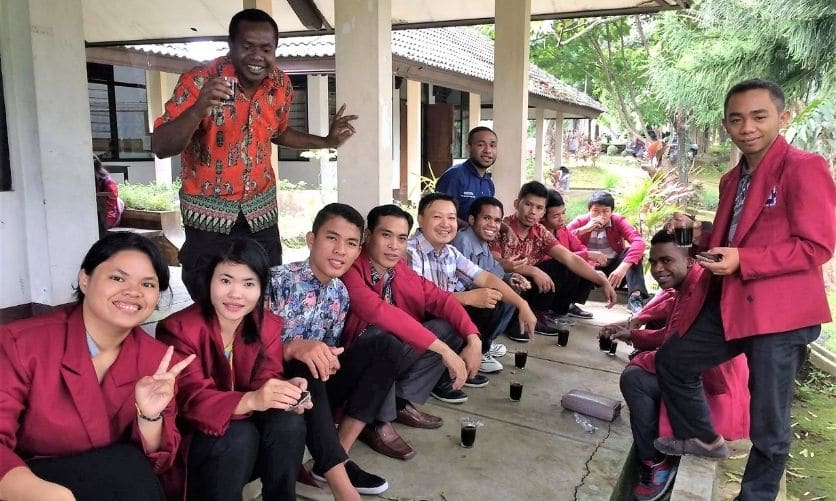 “I see something different in you,” the Korean missionary told Budi* out of the blue. Budi, together with his team, was working on a renovation project of the missionary’s home. Budi did not understand what he had just heard. It came as a complete surprise to him.

Budi became even more surprised when the missionary said further, “If you want to study theology, I will help you get a scholarship.”

“What is that for?” Budi asked quizzically.

The missionary replied, “You could help teach at our pastors’ training classes.”

Budi was born to Christian parents, but his father was a nominal one and was not really into God’s Word. On the other hand, Budi observed that his mother often prayed for him and their family day and night.

When Budi was 12, he dreamed of becoming a doctor. He wanted to help tribal people living in rural areas who could not afford doctors’ fees. He had shared with a friend that, once he became a doctor, he would be more than happy to barter his services, perhaps for bananas or corn.

Looking back, Budi shares, “I had that dream not because I had a good heart but because I was frustrated and stressed with the situation in my family. My parents often quarreled about money matters. I saw them disagree almost every day.” Because of his troubled home life, he chose to hang out with friends deep into the night.

As a young teen, Budi decided to run away from home, preferring to sleep at the church almost every night. It was the safest place for him to find peace. Staying at home with his family became unbearable.

After graduating from junior high school, Budi, then 17, decided to leave his hometown in Central Java province and study at a well-known high school in Yogyakarta. However, he was not admitted due to having incomplete documents. He studied instead at a famous Christian school where, to his dismay, many of the students came from affluent families. He felt it was the wrong choice of school for him. The students’ lifestyle was different — they liked showing off their worldly possessions and club affiliations. Nonetheless, he ended up going there. His parents sent him just enough money to pay his school fees.

Life in Yogyakarta was not easy for Budi. He had to work part-time, selling batik clothing and other items to support himself. Work and socializing with friends took up so much of his time that he rarely went to church. He became weak and sluggish spiritually.

Budi pursued a civil engineering degree at a university in Yogyakarta and continued to work part-time. His career in the construction industry became his world as he moved from one project to another. Despite his busyness, Budi felt empty.

Budi wanted to fill the gaping void in his life. He then met a friend, a social activist, who worked with students in other colleges. Budi joined the group as a volunteer, working with street laborers, pedicab drivers, and sweet drink vendors in a district in the central part of Yogyakarta. These people lived under the bridge next to the Code River, which flowed through the city. Budi spent most nights in the community home that was open to the volunteers. It was located in the slum area, next to the river.

While volunteering, Budi became aware that people had their struggles and had to fight hard for their lives. He realized that his family’s problems were nothing compared to what many other people faced. It made him recognize how selfish he was, always thinking that the world should revolve around him and that he was more important than others. In his volunteer work, Budi saw that while many of the workers lacked material possessions and education, they had rich hearts to help others and serve humbly. He often cried out to God to bless them with the richness of His grace. God was working to fill the gap in Budi’s heart.

Budi shared, “God opened my heart and touched my soul. I saw the world differently. My focus was no longer on myself but the people.” His perspective shifted. As an engineer, Budi changed his attitude toward his building project workers. He interacted with them more, became more concerned about their lives, and started getting to know their families intentionally and being a part of them.

“I felt restoration in my soul. God filled me with joy when I involved myself in someone else’s life,” Budi added.

He started building stronger relationships with his workers. God blessed him with many construction projects, and he formed a good team with a strong work ethic.

It was while he was working on the Korean missionary’s house renovation project that Budi’s life took an unexpected turn. He asked the missionary for time to think about the scholarship offer, although deep down he did not see any benefit from it. He said to himself, “I love working on my building projects, and I have to make money to prove to my parents that I can be somebody.” Budi asked for a sign from God that if it were His will, another person would tell him the same thing — that God was calling him to His service.

A week later, an American missionary offered Budi a scholarship for further religious studies with no strings attached. Budi was intrigued. While he still loved engineering, Budi became interested in pursuing further education, even though he had no clue what he would become.

He decided to enroll at the Baptist seminary in a city in Central Java province. When the lecturer there saw him for the first time, he gave Budi a prophetic word, saying, “I believe that someday you are going to be God’s builder full-time.” Budi chuckled and said firmly, “No, I won’t leave my job. I will still do it part-time.”

But as he pursued his theological studies, God took hold of Budi and changed his worldview. While his college tasks increased in number, his projects from his business partners dwindled. He became too busy with his school assignments, which left him little to no time to work on his construction projects. He remarked, “I helped design churches twice for free. I also designed a Muslim school for free. I did everything from my heart. Then I became involved in the church ministry, and the more I did ministry, the more joy I had. I was sure that God was calling me in this direction, so I just opened my heart to do what He wants.”

Connecting the dots to see the picture that God has drawn of him, Budi excitedly states, “He has changed me from a broken vessel into something precious for His purpose. My dream to be a doctor became a reality — healing broken hearts and broken lives. I was doing construction work, and now I am a contractor doing God’s business.”

For the past 10 years, Budi has served as the Academic Dean of a theological school in Salatiga, an ANM partner. The school currently has about 40 students from different ethnic traditions and family backgrounds from all over Indonesia, from Sumatra and Papua in the west and east to Talaud and Timor in the north and south. The students represent different tribes and come from low-income families of farmers, laborers, fishermen, and carpenters. About 85% of the graduates serve in full-time ministry. Students have to pay a third of the total fees, and the school subsidizes the rest through student sponsorships and other fundraising efforts. Through donations to ANM, some of the students receive subsidies for their schooling.

Budi sums up his story, saying, “There are a lot of things God wants me to do, and I surrender my life to Him. I know He loves me, and I will let Him do His will through me — equipping young people to be willing to serve the Lord wholeheartedly.”

His decision to lay down a promising engineering career and follow the path God has set for him has helped build the lives of young students academically and spiritually. In turn, these new disciples are taking the light of the gospel to their dark communities across Indonesia. Those who give to ANM participate in this lofty goal of producing young men and women who are prepared to carry the message of God’s redemptive love to their people.