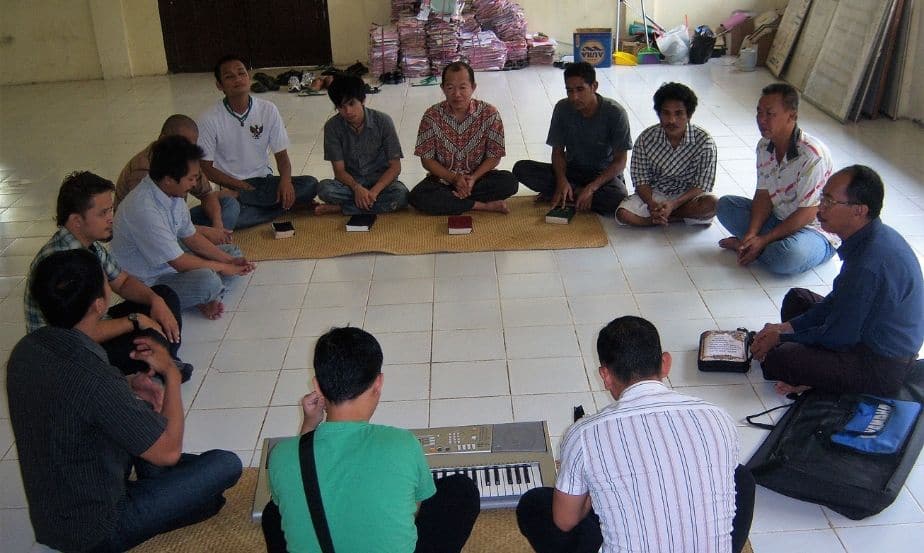 Joyo, the eldest of five siblings, wondered what the future held as he approached his high school graduation. His parents struggled even to put food on the table each day; how could they afford to send him to college? Joyo began looking for work. Perhaps with a good job he could pay for college and even help provide for his younger siblings too.

In the meantime, Joyo pushed himself to excel in school, finishing second in his class of 1984. Then he received the first of two surprises: a letter from the Ministry of Education and Culture of Indonesia offering him automatic entrance to the prestigious law program at Sebelas Maret State University in Solo (also known as Surakarta), the birthplace of Indonesia’s popular president, Joko Widodo. Because of his academic excellence, he didn’t even have to take the entrance test. The second surprise was just as good: a church would cover his tuition.

Joyo was overjoyed. He knew that without his excellent academic marks, he would have needed to take and pass a slew of rigorous tests administered nationally by the Education Ministry. He would have had to compete with thousands of prospective students all over the country. At the same time, he was anxious as he would need to move to a city 32 kilometers away, a city he did not know.

Joyo moved to Solo with high expectations to finish his studies as soon as possible, get a good job as a lawyer, and have a successful life. But this wasn’t God’s plan for him.

God points in a different direction

Growing up in Salatiga, Joyo considered himself to be a Christian. His father, a strong believer, knew the power of prayer. In the midst of their family’s hard life, he constantly encouraged Joyo and his siblings to look to God and pray. Sometimes he would ask Joyo to lead and play the guitar during their family prayer times.

But the gospel did not really take root in his heart until his third semester in law school, when Joyo came to faith in Christ at a revival youth service conducted by a visiting ministry team.

“After accepting Jesus personally, my heart was changed,” he said. “I had peace and joy, knowing that I had been redeemed from my sins. My fear of Satan and death disappeared from my life.”

When Joyo graduated in 1989, driven by the fire of evangelism that was kindled in his heart, he said no to a law career. “My hunger and thirst for righteousness encouraged me to study the Bible more and more,” he said. “I deeply desired to share the Good News I had received with those still living in darkness.”

So in 1992 Joyo started Gema Kalvari (“Echo” or “Voice” of Calvary) Integrated Ministries by distributing gospel tracts and brochures.

In Solo Joyo sensed God moving in his life in ways that prepared him eventually for ministry. For the first time he lived independently, far from his parents and relatives and isolated from any kind of family support system. God used this to teach him to completely depend on him. He witnessed many strange things in the house where he rented a room—widely suspected of being haunted. He realized afterwards that God was preparing and training him for spiritual warfare. As he waited each day for the city bus that took him from his campus to his boarding house, he learned patience. While in law school he studied many aspects of Islam, such as the history of Islam, Islamic law, and Islamic sects. This prepared him for his evangelism work among Muslims.

This gentle yet courageous ministry leader’s enthusiasm in sharing the Good News with others is unrelenting despite the various difficulties and dangers he has faced.

He recalls, “After my repentance, God gave me the courage to testify on campus about Jesus with my Muslim friends. One of my fanatic Muslim friends strongly and publicly accused me of ‘bombing the campus with the gospel.’ Unmindful of what would happen, I continued sharing with them that Jesus (Isa Al Masih) is the right way of salvation (siratal mustaqim).”

On two separate occasions Joyo was summoned to the police station and interrogated about his evangelism. In 1997 Joyo and his team went to a village in West Kalimantan to do evangelism. This incited a Dayak man to such rage that he immediately grabbed his mandau, a traditional Dayak sword, and attempted to stab Joyo. Thankfully, some bystanders restrained the man, and all he could do was shout curses.

Sometimes Joyo received written curses at his home. Other times people burned gospel tracts and books that Joyo had sent. “[God’s] guidance and protection is so perfect that all of these dangers could be overcome,” Joyo said.

God has laid a burden on Joyo’s heart for personal evangelism, public evangelism, ministry of deliverance, counseling, and literature ministry through the distribution of Bibles, Gospel tracts, bulletins, and books. God has blessed him with a team of like-minded young men who share his heart and passion for the lost and those in spiritual bondage. Four of his five-member core group were once deeply involved with the occult, and through Joyo’s personal witness they had been set free by God’s power.

God is using Joyo and his team to set people free from the bondage of the occult and evil spirits, and to lead them to faith in Jesus. In one month more than a dozen people whose lives had been broken by the power of darkness came to Joyo to ask for spiritual help. Many times families and friends of these new believers, upon witnessing the deliverance power of God, also come to Christ.

Joyo and his team have distributed a number of copies of the bilingual Indonesia-Arabic Bible to former Muslims and people who have been delivered from occultism. The bilingual Bible is a powerful mission tool in leading people to Christ, as it can be used to bridge the cultural gap when talking about Jesus with people who have strong Muslim and Arabic cultural background. Using their very own language and cultural attribute, it is easier to start a conversation and discuss further about the true message of the Bible—God’s plan of salvation.

Local missionaries like Joyo understand the culture they work in. When you partner with them, you participate in gospel transformation around the world. Donate here.