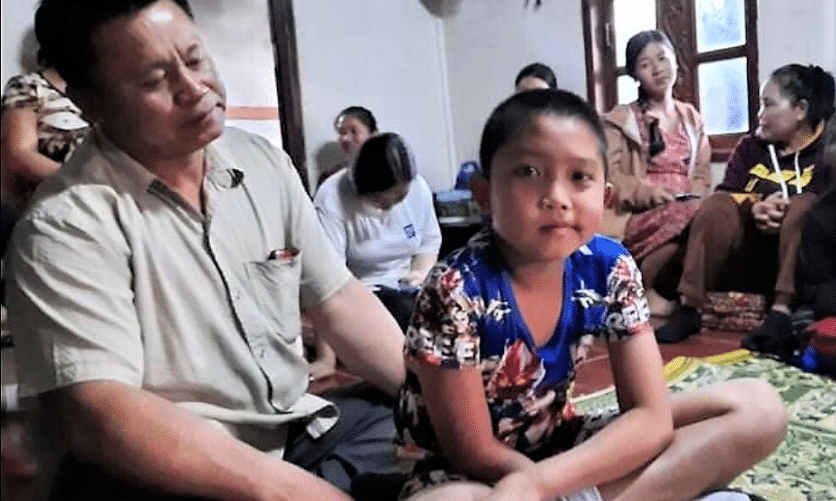 “We’re so sorry. We could not help your son. We do not know what happened to him.” These ominous words from the attending doctor at the provincial hospital deeply troubled Boun. It felt like the weight of the world was upon him, stripping him of strength.

Boun and his wife, Chanya, belong to an unreached people group in the northern part of this Southeast Asian country. Their 12-year-old son, Mai, unexpectedly fell ill in early December last year. All of a sudden he could not move or speak. The family was dumbfounded. Boun brought Mai to the provincial hospital for treatment. After three days of confinement, the boy did not show any signs of improvement. He still could not move or speak. Baffled by Mai’s mysterious condition, the attending doctor candidly told Boun there was nothing more they could do for his son.

A Family on the Brink of Hopelessness

This unreached people group is a patriarchal society, and a vast majority of the people strictly adhere to animist practices and beliefs. According to their cultural belief, the spirits of dead family members remain in the home and need to be cared for. Responsibility for maintaining the worship of the spirits of parents lies with the son. In Boun’s family, this responsibility would eventually fall on Mai, the only son. So when Mai became sick without warning, Boun and his wife were terrified and worried.

Mai’s father decided to move him to the main hospital in the country’s capital city. They boarded a flight to the capital, hoping that the city hospital would be better-equipped to cure the sick child. Unfortunately, their hopes were dashed. After being in the hospital for 10 days, which cost the family a fortune, Mai was still sick.

A friend of the family learned of Mai’s condition and called someone he knew in the city, a member of the church pastored by ANM’s local partner. The family friend asked if someone could go and visit the sick child in the hospital. A team from the church went to the hospital to see the family. After asking Boun’s permission, the church team prayed for Mai and briefly explained to the family that they were praying to Jesus who loves them and cares for them. While Boun respectfully listened to the group as they shared, deep in his heart he was not quite ready to accept this Jesus they talked about. Before they left, the group told Boun, “Please give us a call anytime if you ever need help.”

Again the doctor in the capital city’s hospital broke the disturbing news to Boun that there was no guarantee they could successfully treat Mai based on his symptoms. Disheartened by such a bleak prognosis, Boun decided to have Mai discharged from the hospital and stay for a few days in a relative’s home in the city.

Running out of options, Boun remembered the group who visited them in the hospital and their kind offer to help. He called one of them, and the church pastor and some members came. The pastor gently explained to Boun, “In order for our prayer to be effective, it is best that you, your wife, and your son should be of one heart and one mind in believing in Jesus.” The whole family decided to give their hearts to Jesus that day. The team earnestly prayed over Mai, asking the Lord to heal him.

A House Church is Born

Early the next morning, Mai woke up hungry and started to walk, to the sheer joy and delight of his parents. God heard and answered the fervent prayers of the church team. This bolstered the family’s new-found faith in Jesus.

On the following day, a Sunday, Boun and his family attended the pastor’s church and the whole congregation prayed for them, thanking God for Mai’s physical healing and for the whole family’s spiritual healing.

After three more days in the city, Boun and his family went back to their village in the northern section of the country.

Boun invited the pastor from a nearby town to come and strip down the animist worship system he had in his home. When the villagers heard about it, a crowd came to Boun’s house and watched curiously, expecting reprisals from the spirits. They asked many questions, which the pastor answered. The villagers’ curiosity paved the way for the pastor to share about the redeeming love of Christ.

Boun continues to testify that Jesus Christ has “super power,” loves everyone, and has healed his son. Boun opened his home as a house church. Through his bold witness two more tribal families in his village have come to faith in Jesus and have joined Boun’s home church. A worker from ANM’s local partner is discipling these new believing families in the once spiritually dark community.

God continues to use the prayers and financial contributions of His people in the U.S. to help native Christians convey the transforming message of the gospel to the unreached in their home countries.

*Names and places were changed for security reasons.