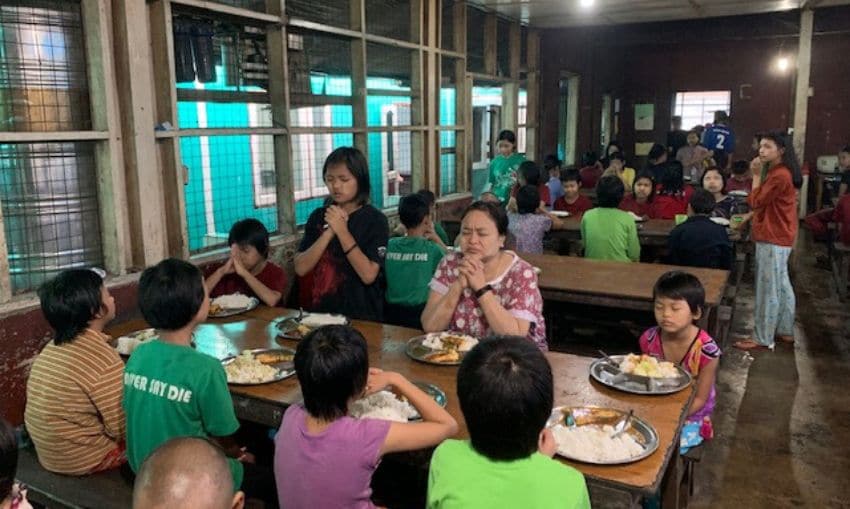 Chit handed the phone to Sharon and muttered, “It’s about the children’s home again.” The woman on the other end of the line was reciting a list of concerns about the well-being of the children.

“The monastery blares their monotonous chants and calls to prayer, the availability of clean water is unpredictable, the overcrowded marketplace is dangerous, and the building needs repairs. Can’t we do something?”

Sharon and Chit loaded their vehicle with supplies and drove two hours to the other side of Yangon to explore once again the conditions their 135 children were enduring. It wasn’t the distance that took so long, but the traffic — dodging pedestrians, bicycles, three-wheeled rickshaws, taxis, buses, and trucks stuffed to the max with giant cabbages or gunny sacks of onions.

Sharon’s Father, David Yone Mo, founded Myanmar Young Crusaders after God miraculously healed him on his deathbed. The children’s home became part of his ministry in 1977. Its location was safe in those days, but David had always dreamed of re-locating the home next to his Bible school campus north of Yangon.

When David died of liver cancer in 2003, he left the responsibility of the ministry to his daughter, Sharon, and her husband, Chit. They too prayed that the children could be next to the ministry’s main facility on the other side of the city.

Four years ago, three acres adjacent to the ministry’s main compound went on the market for $400,000. The ministry didn’t have that kind of money, but ANM’s President of International Operations, P. R. Misra, walked the property and prayed that God would help MYC purchase it.

Sharon informed the owner of her interest. At the beginning of 2019, another buyer committed to purchase the property at full price. Sharon’s hope evaporated.

The buyer backed out in April.

In November the landowner approached Sharon, saying, “I was a friend of your father and had the highest regard for him and his work. I have watched you continue his work with diligence. I have even seen his vision grow. I want to have a part in reaching Myanmar with the gospel, saving drug addicts, training them to be pastors, and preparing leaders for tomorrow through the orphanage. I will sell you my land for $200,000.”

ANM spread the word of this miracle, and supporters responded generously. Sharon expects to take possession of the land by March. Another miracle. It is the beginning of fulfilling the dream of having their primary ministries facilities in one campus.

The truth of Deuteronomy 7:9 is displayed for all to see: “Know therefore that the Lord your God is God; He is the faithful God, keeping His covenant of love to a thousand generations of those who love Him and keep His commandments.”