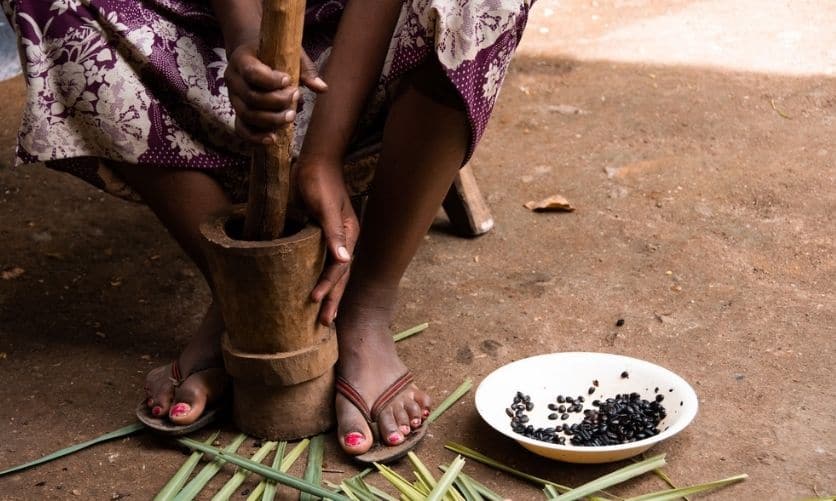 Nearly 2,000 years ago, Paul said that persecution would come to ALL who live godly lives in Christ Jesus (2 Timothy 3:12). Suffering is a norm for Christians, but in Ethiopia, evangelical Protestants, who separate themselves from Orthodox Christianity, suffer severe persecution from state and family.

We live in frail bodies of flesh and blood, and sometimes in our humanness, we fear or question what God is doing. Nuru*, a born-again Christian in Ethiopia, struggled with her life’s circumstances and calling until God revealed Himself to her in a unique way.

Nuru and her husband had an evangelical Christian ministry to the soldiers at the nearby army base, and their rented home saw constant activity. The unbelieving army commander became aware of their outreach to the soldiers, and he stationed Nuru’s husband in a dangerous area as punishment for his Biblical beliefs.

After her husband left, Nuru discovered she was pregnant. Now, as a lone born-again woman in a male-dominated Orthodox society, she had prickles of doubt and fear. No Orthodox friends gathered with her to cook for celebrations, and she was ostracized at the market for her different beliefs. As children walked home after school, they pummeled her house with stones and sang catchy riddles of hate. But the men and women who had found hope and salvation in Jesus continued to gather at her home. This greatly angered her landlord, Kofi.

One day Kofi arrived at Nuru’s house unannounced. She opened her door with a smile, but Kofi blurted out, “I disagree with your beliefs and want to see you gone from my house immediately! In fact, I want to see you dead!”

Shocked, Nuru quelled her instincts to lash out and slam the door in his face. Calmly she told him, “My husband is gone, winter is coming, and I am pregnant. I will need time to make arrangements.” When she closed the door, panic hit her like a trapped animal, but she battled in prayer until she had peace.

The next day Nuru went to work at her government job as usual. When she returned, she found the door locked and a note from Kofi saying she must appear before the town’s judge that evening. Upon entering the chambers, she was directed to sit across from army officers, a local police guard for their compound, and Kofi. Clinging to God like a lifeboat, she tried to ignore her churning stomach.

Kofi complained that Nuru held meetings and converted people in his house and said he wanted her gone from his property.

Then he shouted, “Soldiers surround her house every night and walk around until daylight! Why are they there?”

The local guard interjected, “I see them, too!”

The military leaders looked questioningly at one another, shook their heads, and responded, “No soldiers have EVER been sent to protect her home.”

At that moment, Nuru realized God had sent His angels to keep her safe. Any lingering fear that had paralyzed her vanished as she became fully aware that Jesus held her in the palm of His hand. John 10:28 came to mind (“I give them eternal life, and they shall never perish; no one will snatch them out of my hand.”). She reminded herself of God’s promise.

She had often doubted her calling to remain in her city, but this confirmation gave her newfound confidence, and she surrendered to God’s will. With courage, she asked that her case be heard in a higher court. The magistrate granted this request, forcing Kofi to reopen the house in the meantime. Three months later, Nuru and Kofi faced a new judge who gave her two months to buy a property and build her own home.

Two weeks before completion, a storm leveled her new house to the ground. She swatted away doubts with the wave of her hand. Trusting God to provide, she rebuilt and moved in. Then she went into labor.

Knowing no local hospital or clinic would allow her entrance because they knew of her evangelical beliefs, she endured the birth pains by herself, believing that she was God’s child and He would somehow take care of everything. And He did.

Soldiers involved in her ministry unexpectedly visited her home to say hello. One of them had medical training, and he delivered Nuru’s precious baby daughter. The child was weak and sickly and died two months later. She would not be allowed to bury her child in a cemetery, so she and the soldiers dug a grave in her backyard. God had given her home just in time.

Nuru has now been in the same city for 25 years. After the death of her first child, she went on to have three more children. The youngest is now two years old. Her husband is entrenched in the Ethiopian civil war, and Nuru continues her ministry alone in her war-torn city. Recently she purchased land near her home and is constructing a church building. The foundation is laid, and the pillars are standing. Until now, 30-40 people continue to gather openly for teaching in her home while the church building is under construction.

As leaders are called and equipped within the congregation, they are commissioned to plant churches elsewhere. Hundreds have passed through this ministry. When believing soldiers are stationed in various places, the gospel goes with them. Nuru confidently holds conferences, prayer events, and worship programs because she is convinced that she has divinely been assigned to this place at this time.

“When all I had was Jesus, I found He was enough. He was never ashamed of us and our sins because He paid the ultimate price. I, too, am ready to pay that price for His glory.”