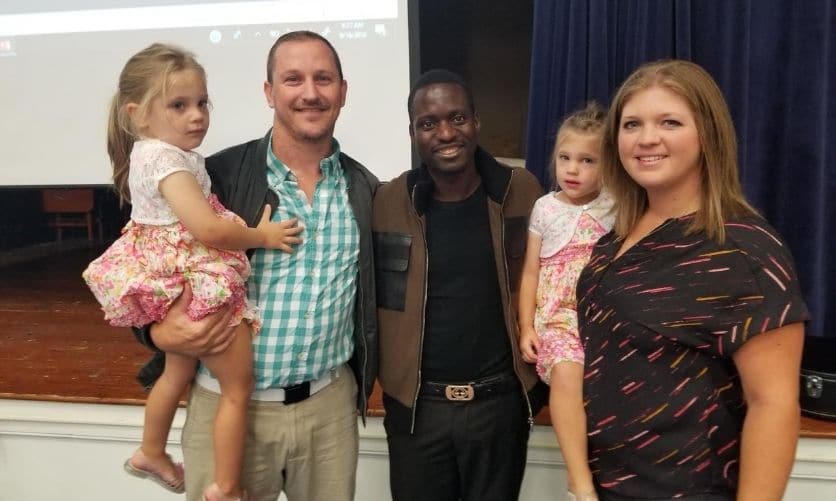 Often Christians want to do something to help people in other countries. But they don’t know what to do or how to do it. ANM can be the bridge. Justin Wilson, a former deacon and now a teaching elder at Grace Assembly in Lynchburg, Virginia, was one of those people. And as he listened to the singing group from Zambia, Justin knew this was the right moment.

“We want to help. We want to support that one,” Justin Wilson explained to his pastor, Lou Mancari, after the church service.

How did Justin decide to sponsor Brother Wilson from Zambia?

Years ago, Lou Mancari worked in a Bible college in Zambia, where he met Brother Wilson. After returning to the US, he desired to inspire his church to get involved with missions. He arranged for an indigenous singing group from the Bible college to visit while they were touring the US. Brother Wilson was one of the singers in the group.

As Justin spoke with Lou, he explained that his family had just watched the film Castaway (which humorously featured a soccer ball named “Wilson”). This inspired them to help this young man who was also named Wilson. (God can use anything to get our attention!) Justin’s family supported Brother Wilson monthly for the next three years so he could attend Bible school in Zambia. Brother Wilson graduated in 2018.

After returning to Virginia, Lou was telling some people at Grace Assembly about the group he had visited. Justin Wilson happened to be in the group and asked if Lou had any news of Brother Wilson.

“That was such a God moment,” Lou recalled later. He told Justin that he had actually seen Brother Wilson in Ghana and that he had been working with Good News Church Planters since his graduation.

Justin said he had been praying for years for Brother Wilson and was blessed to hear that he was putting his education to good use for God’s kingdom.

“That’s part of my investment,” he told Lou.

Lou Mancari, ANM’s Regional Director for Africa said it best: “This is what we [ANM] do if we are that bridge” between native Christian workers and donors.

Even with the restrictions brought on by the COVID-19 pandemic, churches and individuals continue to connect to the Lord’s work in other countries through ANM. Like Justin, you can help reach people who have never heard the name of Jesus even once.

Subscribe to our email newsletter to get started in your journey to be a blessing around the world.