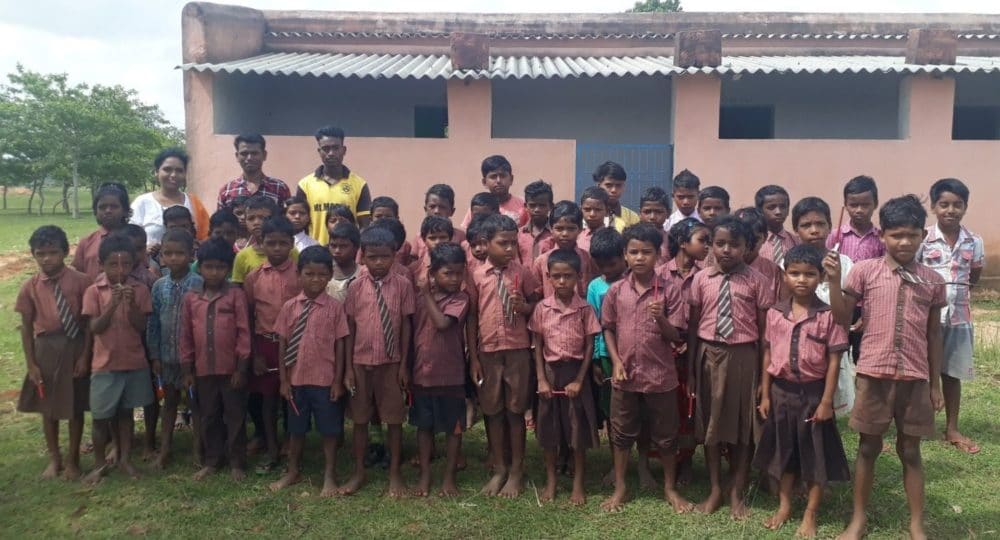 Sekhar and the School in India

Kishor, ANM’s Regional Director for South Asia shared this profound statement referring to Sekhar, a native missionary in India. Kishor went on to explain that “[Sekhar] is very quiet but a very sweet brother. He is not ‘influential,’ but he is very courageous.”

A Risky Place to Minister

Sekhar chose to go to the state of Jharkhand, one of the poorist and most corrupt states in India. Most people there live below the poverty level.  There are almost no job opportunities. Only a few small industries and businesses exist, and they are primarily in the cities. Most people risk their lives through engaging in illegal activities. Many suffer from diseases and malnutrition. They also endure oppression from the local mobs that infest the state of Jharkhand and control the economy, the people, and the public services. These mobs seek to control local administrations, sometimes using dramatic and violent actions in order to bring attention to their goals and to gain the media’s attention.

Now imagine Sekhar, a quiet, meek missionary going to that place to bring the Gospel. He had no influence in Jharkhand, but he was very passionate about sharing the Gospel. He went to Jharkhand knowing the danger and the hardness of the people. He went to try to share the Gospel knowing that he would be unwelcomed by the local religious leaders, mobs, and politicians.  He also knew there was the possibility that he would be seriously injured or killed.

Still, Sekhar chose to go because his love for the Lord compelled him to do so. He knew he had to build a relationship with the people to open the door for him to share the Gospel. Sekhar would ask, “Hey, how can I help you? Do you need clean water? Do you need some warm blankets? Do you need something for your kids? How can I help?”

A Well Opens the Door for Ministry

Sekhar did what he said he would do. He provided the area with clean water as he promised. Through ANM, Sekhar received funds to dig a well. The impact of the clean water opened doors for him. He now had credibility with the people. That made it easy for him to go and share the Gospel, sit with them, eat with them, and talk with them. There was no fear. But Sekhar was not satisfied with what he had accomplished so far. As he visited the villages, he noticed people sitting around, having no jobs. Their lives were stagnant. Their hand-to-mouth living was harsh. He also observed many young children playing on the ground, sitting on a dirt floor, having the bare minimum to live, with only the clothes they were wearing. Their future seemed bleak. They would be just like their parents, sitting there in the same place, living in the same mud house with no employment, no money, and no help. Their choices would be no better than their parents, leaving them with only harmful and illegal choices such as stealing.

Sekhar continued to have a burden for the children. He shared with his wife, “I saw hundreds of children today. They are all alike; they are lost. They have no life, and there are no local schools to train them. The schools that do exist are so far away and very expensive. The roads are in bad shape, making it difficult for the children to travel to the schools.”

A Vision to Help the Children

Sekhar felt God calling him to do something for the children. He had a vision to see the children educated with good values that would lead to a better future. He knew there were many steps to be taken to start a school in an area so influenced by the majority religion. First, Sekhar approached the parents in the village about starting a school. He knew he could be risking his life. He had to convince the parents to send their children to a school and then tell them it would be a Christian school. After overcoming that obstacle, he had to go to the local authorities to discuss opening a school. Next, he had to approach the mob that controlled the area to see if they would allow the school to operate freely.

At each step, Sekhar knew he was taking the risk that he could be rejected or injured. But with God on his side, he felt that nothing was impossible. He courageously took each step. There were a few objections, but the majority of the people were glad that he wanted to open a Christian school.

The first big step had succeeded. Now Sekhar had to buy a plot of land to build a school. God provided him the opportunity to purchase two acres of prime land right on the main road. The problem was that he needed funds within a month. When Sekhar came to Kishor, ANM’s regional director, with the request, there were tears in his eyes. He desperately wanted a school to bring the Gospel and a better life to the younger generation. ANM was able to provide Sekhar with the money he needed for the land.

In 2019, Sekhar started a small one-room school with five students and his wife as the only teacher. The school now has four classrooms and six teachers, with 100 children attending. God heard his prayer and saw his hard work, honesty, faithfulness, commitment, courage, and dedication. He never gave up!

Sekhar is happy with his life as principal of the school. The people protect him and help him with money and resources. The children are learning about God and the Bible. They know how to pray and share Bible stories and the Gospel with their parents. His school has become a lighthouse. It took courage, commitment, and dedication to see his vision come to pass. Sekhar realized that God honors those who honor him, even during challenges, no matter how dark the place is.

Sekhar recently shared that he has 200 children waiting to enroll, but he does not have accommodations for them yet. His vision keeps expanding.

Will you help Sekhar reach more of the children with the Gospel and an education? You can support teachers in mission schools reaching the unreached and serving children. You can pray for the school to expand and reach more children, giving them hope and a better future. Please consider what you can do today.