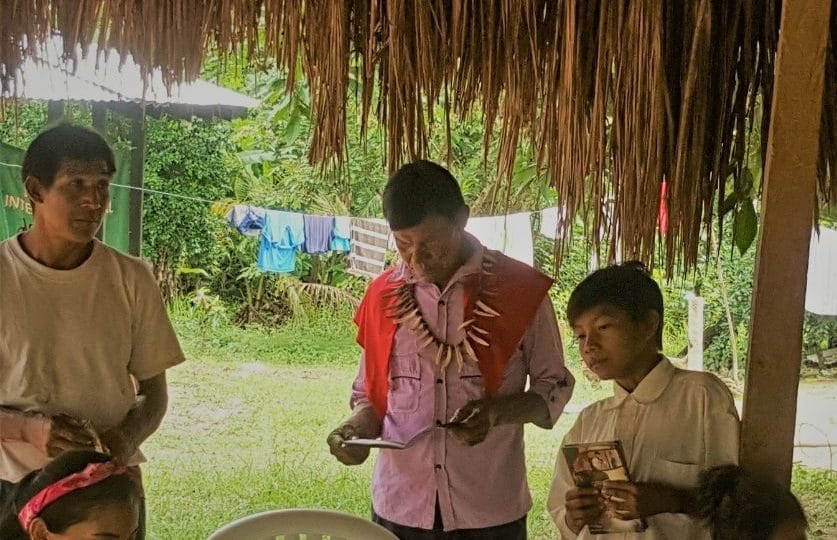 Christians often wonder if their prayers are really helping. This story illustrates the effectiveness of prayer.

Brian Mullins, Director of Church Relations at ANM, was leading a short-term trip in Colombia with a team from Legacy Church in Ruckersville, Virginia. As they drove toward a village accompanied by Helman Ocampo, a local Christian ministry leader, Helman suddenly stopped the car. He got out, ran to talk to a man, and then hopped back in the vehicle to proceed to the planned destination. Helman said, “Something wonderful just happened. We got the okay to visit another tribe.” Helman explained that he had been trying to visit this nearby tribe for three years, but they chased him out again and again. But now, the tribe was at last willing to welcome the team that same day.

He was excited that they would have the opportunity to pass out booklets that shared the biblical story from creation to resurrection through pictures and short sentences in the tribe’s dialect. After ministering in the location they had planned to visit, the team made their way to the village where Helman had repeatedly been shut out.

The team met the villagers in a pavilion where they were making baskets and talking. The group noticed a house a little distance away from the pavilion; the village witch doctor sat outside eating. Brian said to Pastor Adam Schwenk of Legacy Church, “This is what we are here for: to tell people about Jesus. Let’s go.”

The indigenous people brought out some items to sell. Brian suggested that it would be prudent for the team to purchase some items to provide Helman easier access to this village in the future. The team bought handmade gifts after some bartering. As the ANM team was leaving, they noticed that the witch doctor had come to the pavilion to join the villagers. He was looking at the booklet they had given him and reading the story of Jesus!

There is another reason that this story is significant. The ANM staff member who processes applications for short-term mission trips had prayed that the team members would, on this trip, be able to take the gospel message to an unreached people group for the first time. When the ANM staff member heard Brian and Adam’s story, she realized that God had heard and answered her prayer very specifically.

This story illustrates how prayers open the doors for native Christians to reach the remaining unreached to fulfill Matthew 24:14 (“This gospel of the kingdom will be preached … to all nations”). The prayers of the team, the sending church, and the ANM staff member were heard and answered.

Find out how your church can visit the mission field with ANM.