Church in Spain Continues to Grow Slowly, But Steadily 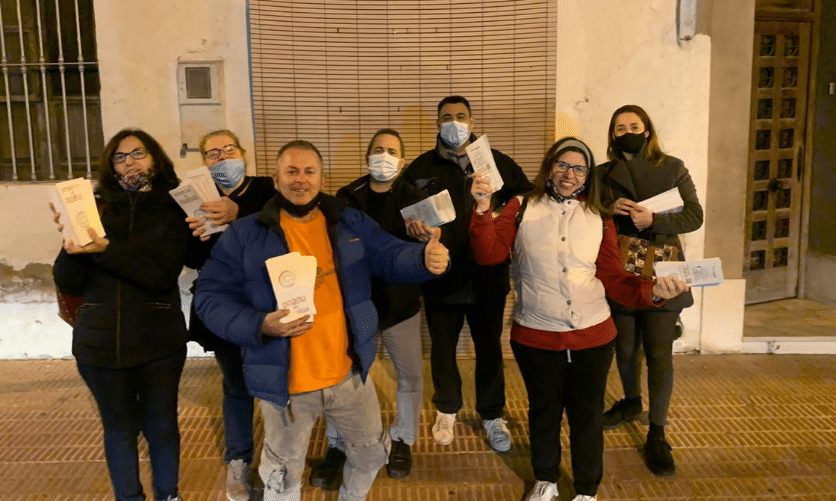 *Photo is of church team passing out evangelistic tracts in Valencia, Spain

Marta sat in her room with the Bible her parents gave her after her confirmation. It didn’t make much sense to her, so she quietly prayed, “God, if you are real, show me.”

Marta was an educated teacher of French. At times she felt the love of God, but she desired to know more about the Jesus she learned about as a child. The secularism and materialism of Valencia bothered her and seemed to deaden the people all around her in southeastern Spain. She continued to pray for direction.

Her search for the truth led her to a church that she watched online for a while, but she wanted to go to an actual church building. She longed for fellowship and more teaching, so she decided to fast and ask the Lord to show her a church nearby. The day she began praying, she found some gospel tracts in the day’s mail. Apparently, they had been dropped off by people from Iglesia Esperanza Viva (Living Hope Church), located more than 30 miles away.

That evening, Marta sat in bed and read the literature. She felt compelled to go to this church, even though it was over half an hour away. Two weeks later, she drove the distance and walked into a small congregation of 74 dedicated fellow Spaniards, ready to give everything to spread the gospel in a country where evangelism is still such a challenge.

Marta’s warm welcome to Esperanza Viva put her at ease, and she basked in the presence of God during worship. After the teaching, Marta lingered to introduce herself. Pastor Osmany greeted her and asked if she had any questions. “How do I have a personal relationship with Jesus?” she asked. Osmany explained. In the car on her return trip, she surrendered her heart and cried out to Jesus to become her Lord and Savior.

According to an Evangelical Focus report in May 2019, about 7,500 towns and villages in Spain (of just over 8,100 across the nation) still have no evangelical church. “Out of more than a million and a half inhabitants in the province of Valencia, only 0.6% (or 9,000 Christians) are evangelicals,” Osmany says.

He continues, “Spaniards are typically not emotional about religion, so they think long and hard about the costs when they thoroughly choose Jesus as Lord and Savior. If they take this step of faith and the gospel penetrates their hearts, they dedicate themselves completely. Even though the growth is slow, it is lasting.”

Osmany was born in Cuba. Russian financial support for Cuba evaporated after the fall of Soviet Communism.  As life became extremely difficult,  Cubans became desperate. In their need, they turned to Christ and revival broke out. In 1993, at the age of 14, Osmany surrendered his life to Jesus and never looked back. Great miracles of God followed. His seminary studies led to evangelism, pastoring, writing, research, teaching, leadership of over 15 churches and 50 pastors, and finally the directorship of a seminary. In 2011 his seminary had students from more than 41 denominations, and Osmany oversaw 200 teachers. But, at the height of his ministry, God called him to Spain to share the gospel, train workers, shepherd, and open new ministry work.

He and his family began attending Iglesia Esperanza Viva in Valencia, and the leadership noticed his pastoral gifts. Three times they asked him to be the church’s new pastor, and three times he said, “No.” The church leaders persisted and agreed to ask Osmany one last time. Frustrated and annoyed, Osmany again responded in the negative. However, when sleep evaded him that night, he left his bedroom and sat in a chair, crying out to the Lord for direction. God impressed on his heart, “I will use you and work through you if you agree.” Trusting Him to provide the time and the strength, Osmany walked into the church the following day and accepted the position.

In less than two years since Osmany became the pastor at Esperanza Viva, the church has planted two daughter churches. His vision is to reach all the towns in the province of Valencia without an evangelical church. An evangelism and church-planting team fasts and prays weekly for the lost. They saturate areas with thousands of gospel tracts left in mailboxes, on cars, and on doorsteps. They are working to start new churches so that people like Marta have somewhere nearby to go to church.

The Esperanza Viva team lives by faith. They receive no salary from the church and work secondary jobs to earn a small income. They have learned to live frugally because their only desire is to see the people of Spain come to Jesus.

Pastor Osmany is excited about each new person who comes to Jesus. He says, “My prayer is for us to be like candles, lighting up Spain for God. Please pray for more workers so Christ can truly be known throughout this country.”

Despite the long drive, Marta attends Esperanza Viva every Sunday and is part of a four-month discipleship class with other new believers. Today, she is ready to be baptized in water and is praying for a place of worship to open up closer to home.

ANM supports fruitful ministries around the world that give their all in some of the most challenging areas.