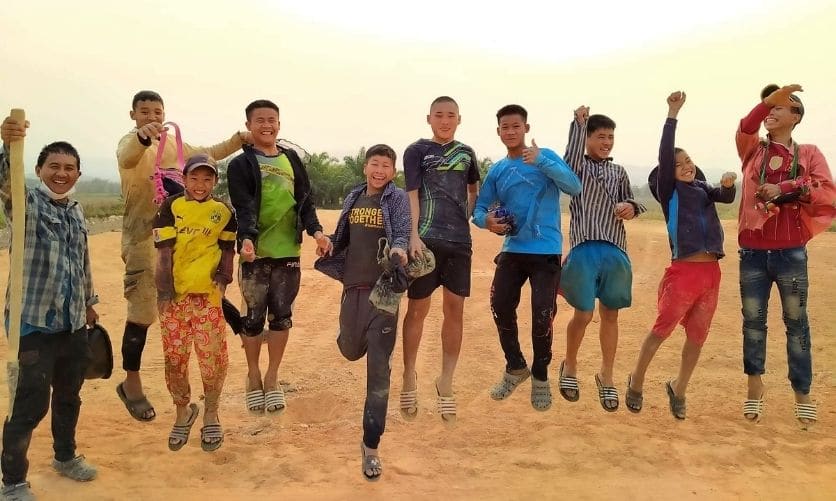 Daye and Sasu, two brothers, were feeling sad and worried. Life had been very stressful with a father who was a drug addict and a sick mother fighting AIDS. It was difficult for the two young boys to watch their mother die of AIDS. Their father continued to take illegal drugs in his sorrow over losing his wife and his drug use escalated. There was little to eat and no care for them. They were living in poverty in Myanmar, fending for themselves. How could life get worse?

Then the unthinkable happened. Their father overdosed, lost his mind, and committed suicide. What would they do now? They had no relatives in their home country of Myanmar. How would they survive?

Then Daye and Sasu received the exciting news that an aunt was coming from Thailand to take them home with her. They were glad to get to her home in a mountain village and meet her husband, their uncle, who was Thai. They were made very welcome and began to develop a good relationship with their aunt and uncle.

As they stayed longer in his home, they were dismayed to notice their uncle’s attitude toward them change. He began to give them more and more jobs to do that were very difficult for the young boys. They weren’t allowed to go to school as he had them working all day. Their uncle also begrudged spending money on food for them, so they had little to eat. As the boys became wearier and more emaciated, the villagers noticed their plight.

Daye and Sasu were fearful about another change in their lives, but when they were taken to the Huai Nam Khun Children’s Home immediately their living conditions improved. They had three meals every day and began to gain weight. They were able to attend school daily. They developed friendships at the home and at school. They were happy. Best of all, they came to know God, came to believe in Jesus as their Savior, and were baptized.

Now, after living at the home for seven years, Daye and Sasu will be graduating from sixth grade. Daye plans to go back to help his aunt. He will continue his studies independently and when he graduates from high school, he plans to go to Bible school.

Sasu will continue his general education when he moves up to level one of secondary school. He intends to finish his studies and pursue vocational education to become a car mechanic. He will stay with Supphakit and Sangla at the home until he graduates.

Supphakit and Sangla write, “It is God’s blessing that we have served these two brothers that God has brought into our care. [We] taught them, led them, and saw their growth in body, mind, and soul. Please say a prayer for both Daye and Sasu. Let God lead their lives until they are spiritually mature.”

Supphakit and Sangla went on to state that the boys have been such a blessing in the home. They fear God. They have become like brothers to many of the children in the dormitory. They are the worship leaders during chapel time. “They are the light and mouthpiece of God.”

Many of the children in the village near the children’s home are troubled. They become slaves to drugs from an early age, drop out of school, and join violent gangs. Supphakit and Sangla praise God for those who make it out of this trap: “But thank God for these children whom God has brought into our children’s home, for we have had the opportunity to teach them.”

You can have an impact from your home on children like Daye and Sasu. You can help Supphakit and Sangla to keep ministering to children in danger of joining a gang or getting involved in drugs.

Your prayers make a difference.
Download “21 Ways You Can Advance the Kingdom Through Prayer.”

*Header image: Members of the children’s home in Thailand.