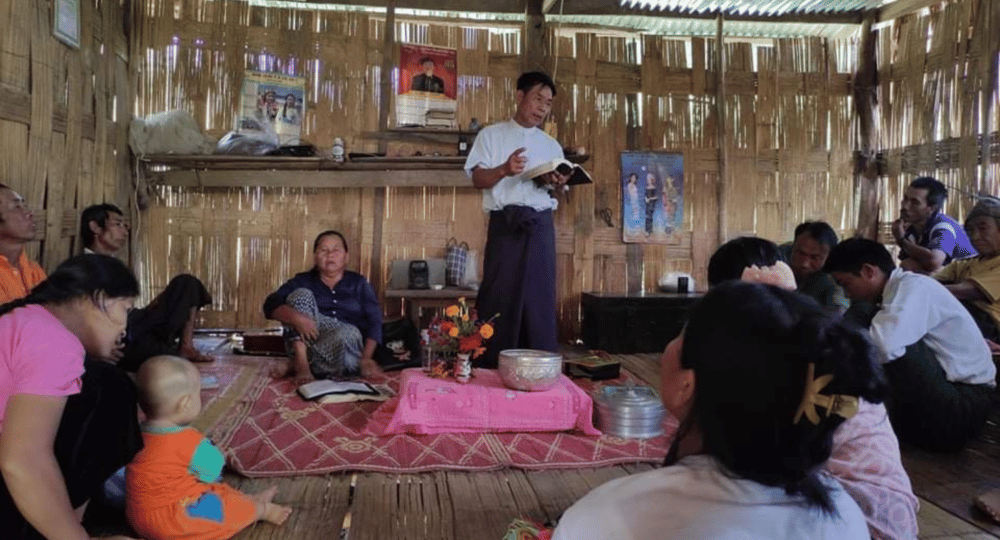 “The doctors are coming! They are coming to our village,” shouted villagers from Yuakyi village in the Inle Lake region of Myanmar. The village of 100 houses was excited to see the missionaries from returning, but for an unusual reason.

When the three missionaries first entered Yuakyi to share the Gospel, they arrived at a home experiencing a chronic medical crisis. The man of the house was struggling with severe leg pain. He had fallen from a tree several years earlier. The bigger problem was that he could not get a decent night’s sleep because of the pain from his leg.

To the family’s astonishment, that very night after the missionaries prayed for his healing, the man slept soundly, and the leg pain was gone. He was healed completely! The man, filled with joy and awe, enthusiastically spread the news throughout the village about the prayer and miracle he had received. Other families invited the missionaries to their houses and asked them to pray for healing from their various physical ailments. God answered their prayers for other families in the village. Those who received healing also started to tell neighbors about their experiences. Thus, the missionaries who were there to evangelize were instead perceived as doctors. But the title of “doctor” opened doors for them to be welcomed into homes and to build relationships with the villagers.

Villagers come to faith in Jesus

Then Win Naing Oo and his wife, Myint, heard about the “doctors” and invited them to their house. Myint was burdened for her 15-year-old son, who had a long-term heart problem. He could not rest at night because of his condition. Myint welcomed the missionaries and requested that they pray for her son. They knelt in prayer and earnestly asked God to extend His healing hand over the young man’s life. God heard their petition. The young man slept soundly that night and awakened feeling better. Win marveled when he came home from work and heard that his son had slept all night.

The next time the missionaries visited the village, Win was curious to hear the Gospel from them. With the conviction of the Holy Spirit, Win confessed his sin and trusted in Jesus for salvation. Finally, the result the missionaries had been working for — a new believer in Jesus! They were so glad to now be seen as missionaries instead of doctors.

When the entire village heard about the change in Win’s life and saw his desire to follow Christ, they spoke badly about him. Win chose to attend a camp held by a Baptist church, where he learned more about Christ. Again the following year, despite the opposition, he decided to participate in the Gospel camp. With the help of the Holy Spirit, he finalized his decision for Christ by being baptized at the end of the camp on Easter Sunday. Win was very aware of the consequences he would face for being a follower of Christ. Yet he came home prepared to forgive and endure whatever cost for Christ’s sake. Myint has also accepted Jesus as her Lord, even after seeing how poorly her husband was treated.

People Need to Hear about Jesus

These three persistent missionaries and others like them need prayers and support to go into new villages and share the Gospel with people who have never heard the name of Jesus.  More than 7,000 people groups are still considered unreached. That means over 3 billion people don’t know that Jesus came and died for their sins. Would you consider supporting a missionary to visit another unreached village?