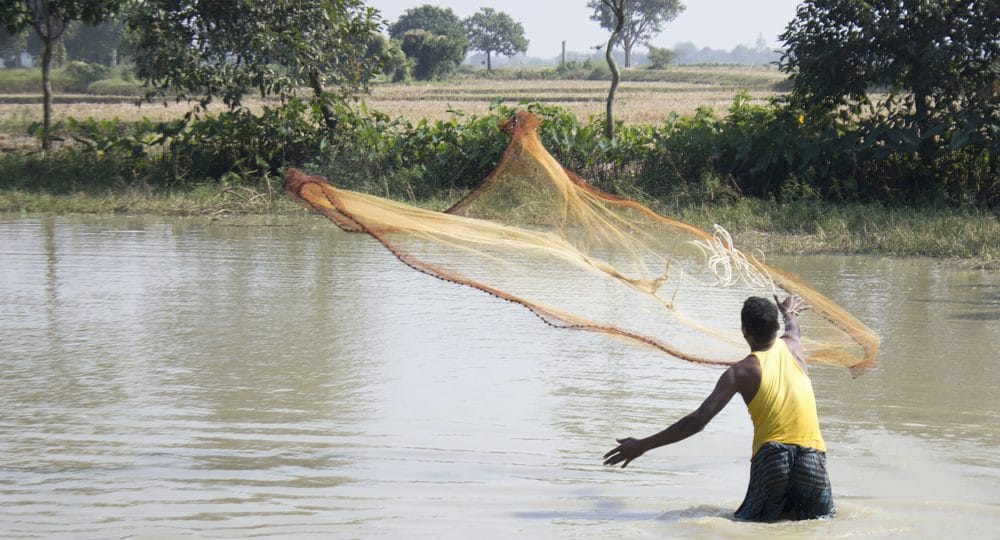 Khalid grew up a very devoted Muslim in the Dinajpur district of Bangladesh. He observed all religious rituals since childhood.

But the 45-year-old father of three never had real peace and comfort in his life. Khalid had a volatile temper and would quickly fly into a rage even at the slightest provocation. He did not hide his anger. In fact, he flaunted it. He was never satisfied with what he had, and his discontent ignited his outbursts.

Khalid’s temper frightened his wife and three children. His predisposition to angry fits kept them constantly on edge.

“I was not a good father nor a good husband,” he confessed.

When his older brother, Malik* received Jesus as his personal Lord and Savior, Khalid became indignant and resolved to become his brother’s adversary. He did all he could to get Malik in trouble so he could bring an allegation of blasphemy against him. “It was very hard for me to accept him as a brother and a Christian,” Khalid shared.

Malik started serving the Lord as a pastor with ANM partner ministry Isa-e Church Bangladesh. In an effort to discredit and disparage his older brother, Khalid observed him very closely. What he noticed confounded him. Khalid saw his Christian brother leading a very blessed and peaceful life with his family. Witnessing the blessings in his brother’s life stirred even more bitterness and antagonism in Khalid’s heart.

Most of Khalid’s neighbors and relatives supported him in his hostile stance against Malik. They even prodded him to teach his brother a lesson.

One day Khalid inflicted harm on his brother’s family, and Malik caught him red-handed. Khalid fearfully expected Malik to report him to the police. He was convinced that his brother would pursue legal action against him for the wrong he had done.

But contrary to Khalid’s grim expectations, Malik did not file a police report. He visited his hot-tempered younger brother in his house. Malik was neither upset nor agitated. His calm and peaceful demeanor caught Khalid by surprise. Malik chose forgiveness. “I love you, and God loves you,” Malik insisted. Khalid could hardly believe his ears.

Khalid narrated, “When I observed his humility and compassion, I was baffled. How was it possible for him to not take any action? True, we are brothers, having come from the same mother’s womb, yet I have been antagonistic toward him. I [had] decided to become his enemy.”

That evening Malik came over to Khalid’s house. Again, Khalid was utterly confused. Malik asked him if he could talk to him. “Yes, of course,” the still perplexed Khalid replied.

Malik started reminiscing about their past, sharing memories from their childhood all the way through their adulthood — “every single thing,” Khalid emphasized. The older brother went on to explain why he had become a follower of Christ. Afterward, he started pitching questions to Khalid, boiling down to whether or not he had committed any sin, and if he had, how he would escape from it.

After Malik left, Khalid pondered the two questions all night. Realizing that he had made several mistakes in his life, he knew that he was a sinner. But when Khalid tried to grapple with the second question — how he could be saved from his sins — he had no answer.

The following evening his brother again visited Khalid to ask his answers to the two questions. To the first question, Khalid responded, “Yes, I am a sinner.” As to the second question, however, its answer remained a puzzle to him. He did not know how he could be saved from his sins. Malik, sensing Khalid’s discomfiture, shared with him the answer to this question, starting with Genesis, how God created everything and man fell into sin, and continuing through Jesus coming down to earth to save sinners. As Khalid listened to his brother, he felt something he had never felt before — a sense of peace.

Upon Malik’s invitation, Khalid attended his brother’s Jamat (fellowship) that Friday. He then realized that he had been going down the wrong track in life and needed to get on the right path. His brother gave Khalid an Injil Sarif (New Testament) to read. As he did so, many new things were revealed to him. Most importantly, he realized that he needed Jesus in his life as his Savior.

All the while, Khalid’s family members noted a marked change in him. His disposition had changed from anger to humility.

Khalid continued his fellowship with Malik and other believers, and his faith flourished. When Malik invited him to attend a new believers’ seminar this past July at Guliara Isa-e Church, he did not think twice about it and agreed to go. Khalid and the other new believers received teaching on different subjects that encouraged them in their faith at the seminar. Khalid gave his life to Jesus and followed the Lord in water baptism.

“It was a wonderful feeling when I was baptized. Now I am practicing a believer’s life at home and before society. I am also facing some problems from my neighbors and relatives, but I am ready to encounter anything for the Lord Jesus,” Khalid declared.

Seeing how the light of Christ’s saving love has changed Khalid, his family has also decided to embrace the Christian life.

“I praise God for helping me break free from my blindness and showing me the Truth. Please pray for me that I may remain faithful,” Khalid testified. “I was in bondage, but now I am free in Jesus’ name!”

Your support of ANM through giving and prayer enables its partner ministries — like Isa-e Church Bangladesh — to continue transforming the lives of many by reaching out to them with the good news of Christ’s redeeming love.